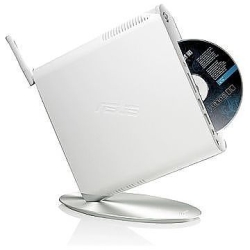 The Asus Eee Box EB1501 was already one of the most powerful nettops in the Asus family thanks to a dual core Atom 330 processor, NVIDIA ION graphics, and a built-in DVD drive. But now it looks like there’s a Blu-Ray option as well, at least for European customers. Swiss retailer web site Toppreise.ch has listings for a Blu-Ray version of the nettop with Windows 7 Home Premium and 2GB of RAM and a 320GB hard drive for about 426 Euros or $617 US.

Of course, for that kind of money you could get a much more powerful machine if you don’t care so much about size and low power consumption. But the EB1501 is one of the smallest Blu-Ray players you’re likely to find. The nettop is roughly the same size as a Nintendo Wii, which is to say, it’s not that much larger than the Blu-Ray discs it can read.

Toppreise.ch says the EB1501 with Blu-Ray will begin shipping on January 19th.