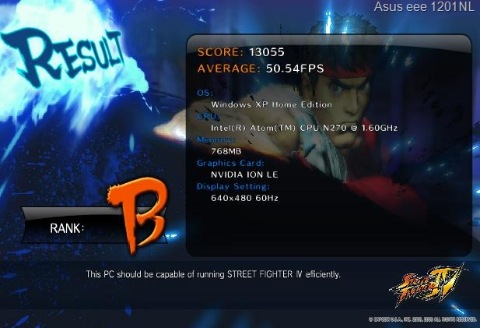 The Asus Eee PC 1201NL has been reviewed before, but the crew at GadgetMix has posted the results of their own hands-on testing. Apart from the typical battery life, build quality, and general performance comparisons, they also decided to benchmark the 1201NL using Capcom’s Street Fighter IV.

Better still, they’ve shared a video (which you can watch after the break). Game play looks pretty smooth, and Kamal reports frame rates above 60FPS with settings kept at low levels. It certainly appears to perform better than the 1201T he compared it with (yes, it’s running at 800×600 whereas the 1201NL was at 640×480).

One YouTube commenter with two identically configured systems, however, reports better performance from the 1201T specs.