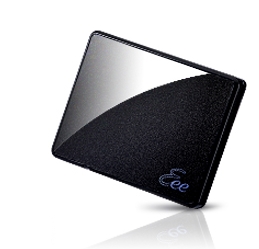 There was a time when I sspected Asus was thinking about changing the company’s name to Eee. After the successful introduction of a line of Eee PC netbooks, Asus went all out and introduced the Eee Box line of nettop computers, the Eee Top all-in-one PC line, an Eee Keyboard multimedia device for the living room, and even an Eee Stick video game controller.

Things seem to have slowed down on the Eee front lately, as Asus focuses on higher end machines, but when it came time to pick a name for its upcoming tablet, Asus did go with Eee Pad.

And now it looks like Asus also has a USB hard drive line with the Eee logo slapped on it for good measure. Taiwanese shopping site PC Home has a listing for a 1.8 inch, 30GB USB hard drive from Asus which is selling for about $31 US.

While 30GB isn’t exactly a lot of storage, a 1.8 inch USB hard drive isn’t really all that much bigger than a USB flash drive — and it’s a heck of a lot cheaper than a 30GB flash drive, making the Eee hard drive a decent little tool for copying files between computers or just carrying around some documents, media, or other files on the go.

No word on whether we’ll ever see this product in the US.