Asus started selling its first Chrome OS desktop computers in March with the launch of the $179 Asus Chromebox M005U. The tiny desktop is small enough to hold in one hand, packs an Intel Celeron 2955U Haswell processor, 2GB of RAM, 16GB of storage and Google’s Chrome operating system.

It also runs Ubuntu or other Linux-based operating systems reasonably well, and it’s easy to upgrade the RAM or storage yourself.

But if you want a system with a more powerful CPU, now you can get one. The Asus Chromebox-M075U is now available for about $399, and it features an Intel Core i3-4010U processor. 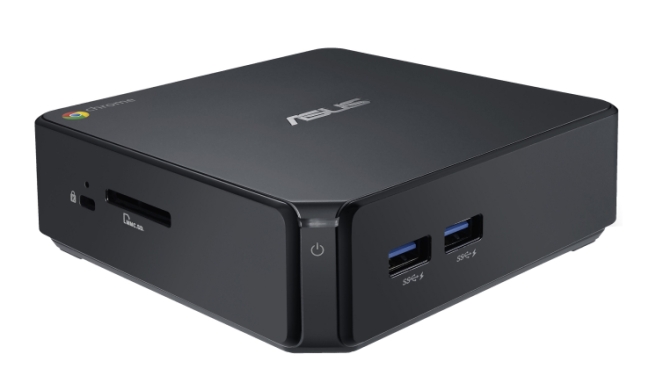 The best prices I’ve seen for the new model are from Amazon, ExcaliberPC and Provantage, which are selling the Asus Chromebox-M075U for about $399.

Note that some retailers says the system has 4GB of RAM and others say 2GB. I’m checking with Asus to see if I can find out how much memory the system really has — although the chipset should support up to 16GB of RAM if you want to upgrade the memory yourself.

Unlike the cheaper model, the Asus Chromebox-M075U should ship with a wireless keyboard and mouse, so you won’t have to supply your own.

The new system has a higher clock speed, more cache, support for hyperthreading, and should generally run circles around the original Asus Chromebox in CPU benchmarks. Seeing as the cheaper model is already fast enough to handle most web browsing, web app, and online video tasks, the extra power you get from the Core i3 CPU may be overkill for some users… but it’d probably come in handy if you want to convert your Chromebox into a Linux box.

Want a cheaper system with an Intel Celeron chip and 4GB of RAM instead of the usual 2GB? Mobile Computing Solutions is offering an $220 Asus Chromebox-M004U Deluxe through Amazon

13 replies on “Asus Chromebox with Core i3 Haswell now available”