The consumer-oriented Asus Chromebook Flip C101 isn’t the only new convertible Chromebook Asus is introducing this week. The company also has a new model aimed at the education market.

It’s called the Asus Chromebook Flip C213NA, and it’s a notebook with an 11.6 inch touchscreen display, a 360-degree hinge, a ruggedized design, and an Intel Celeron N3350 Apollo Lake processor.

It also has a few features that really make it stand out from other Chromebooks. 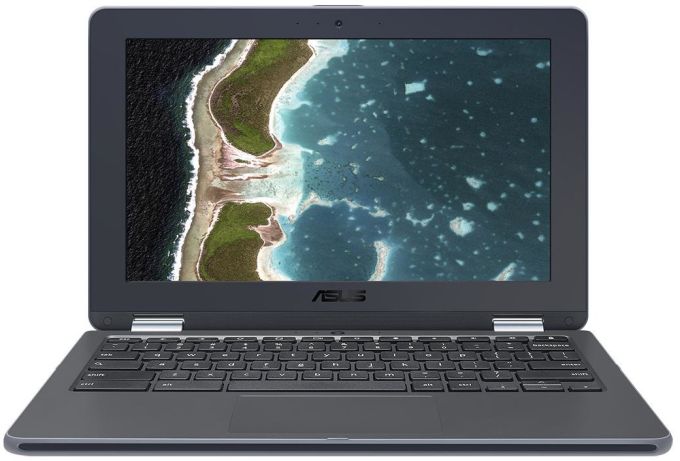 First up, this model has a 1600 x 900 pixel display. That’s a resolution you don’t see very often these days, but it’s actually a pretty nice choice for an 11.6 inch laptop, where a full HD display might be overkill, but an HD+ screen offers higher pixel density than the typical 1366 x 768 pixel screens usually found on small, cheap laptops.

Another odd feature? There’s a camera built into the top of the keyboard section. That lets you prop up the tablet in “tent” mode so that the screen is facing you and the camera is facing away, allowing you to film a lecture, for example, while interacting with the display. There’s also a front-facing webcam.

It also has a microSD card reader, and a 46 Wh battery.

The Asus Chromebook Flip C213NA measures about 0.8 inches thick and weighs about 2.8 pounds.

Retailers in the UK and Europe are starting to show product pages for the laptop, but I haven’t seen anything official about the price or release date yet. But Nicole from Mobile Geeks did get some hands-on time with the laptop at Computex this week: