Asus is reportedly planning to launch a new Chrome OS laptop which is described as the company’s “most affordable Chromebook to date.”

Since Asus launched two Chromebooks priced at $249 last summer, that suggests the new Asus C201 Chromebook could have a list price of $199 or less. 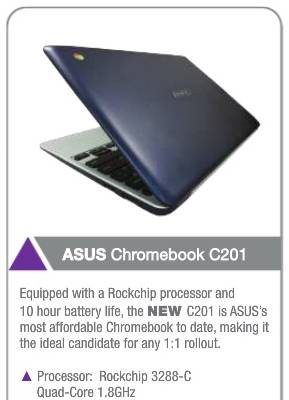 OMG Chrome has posted an image of the upcoming Chromebook from the latest catalog of Troxell, a company that sells products to schools.

This wouldn’t be the first Chromebook to feature an ARM-based processor rather than an Intel x86 chip. But it would be one of the first models to feature Chinese chip-maker Rockchip’s quad-core ARM Cortex-A17 processor (which is pretty competitive with an Intel Atom Z3735F processor).

There’s no price listed in the catalog. Instead Troxell asks customers to contact the company for pricing. But I doubt the Asus C201 will be a Troxell exclusive, so it probably won’t be long before we start to see this laptop show up at retail outlets.