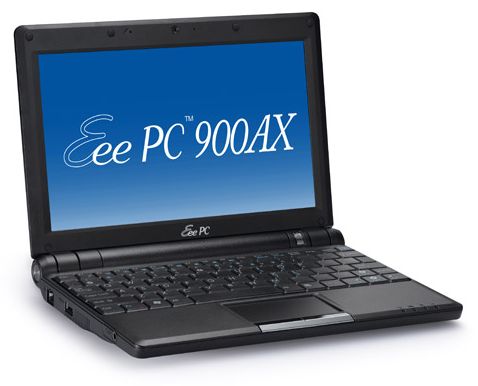 The first Asus netbook was a model with a 7 inch display. The Eee PC 701 was successful enough as a product to kick-start the netbook revolution, but it had a low resolution screen and a cramped keyboard. So about half a year after its launch, Asus introduced a series of models with 8.9 inch displays, and later that same year the Eee PC got one more size bump with the launch of the Eee PC 1000H and its now-standard 10 inch, 1024 x 600 pixel display.

So you might think that the whole 8.9 inch screen thing was nothing more than a phase Asus was going through while trying to find the ideal screen, keyboard, and overall case size for a netbook. But it looks like Asus isn’t done with the 9 inch netbook. A few weeks ago we spotted a new model called the Eee PC 900AX on the FCC web site. And as expected, it turns out that what we’re looking at is a brand spanking new Eee PC netbook with an 8.9 inch display.

All in all, I wouldn’t be surprised if the Eee PC 900AX is essentially the same computer the company was selling in 2008 as the Eee PC 900A or Eee PC 901. Maybe Asus found some extra units in a warehouse somewhere and decided to slap a new name on them. Or maybe there’s some extra feature hidden away that I’m just not seeing.

There’s no word on when or where the Eee PC 900AX will be available or how much it will cost. But while the 10 inch netbook has become the de facto standard, I know there are some people out there who really prefer the smaller size and lighter weight of 9 inch models, so you might be able to take heart in the fact that Asus is at least still thinking about smaller netbooks.

Update: The user manual is now available. There doesn’t contain too many surprises, but does confirm that there are only 2 USB ports. It also looks like you get a single headset jack with mic and headphone capabilities instead of separate jacks for each. The touchpad supports multitouch gestures.