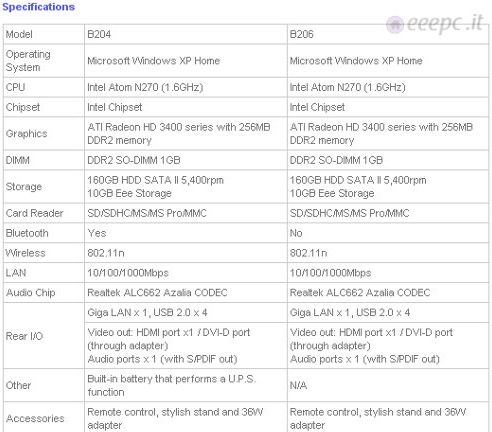 While Asus is replacing the Intel Atom CPU in its bottom of the line Eee Box nettop computer with a Celeron chip in an effort to keep the price low, it looks like the company also has plans to offer two more powerful versions of the tiny desktop computer. The company has unveiled plans for the Asus Eee Box B204 and B206.

Both will share the same dimunitive size and each will use the power saving Intel Atom N270 CPU, which is the same processor used in many of the company’s mini-laptop computers. But the new Eee Box moels will also pack dedicated graphics cards and HDMI, DVI-D, and S/PDIF outputs, making them slightly more suitable for use as media PCs.

On the other hand, these netbooks lack TV tuners and optical disc drives, which are two of the things I’d really expect to find in any decent home theater PC. Still, if you’re looking for a machine to stick next to your HDTV that can play web video and stream HD videos over your 802.11n WiFi network, the Eee Box B204 or B206 may be for you.

The only difference I can find between the two models is that the B204 has Bluetooth while the B206 does not.

No word on how mc these new models will cost or when and where they’ll be available.

Update: The Eee Box B204 will also have a built-in battery that works as a UPS, or uninterruptible power supply in the event of a power failure, something I failed to notice in my first look at the chart above. Also, the official press release is now available.