Cheap smartphones these days are really, really cheap. I recently picked up a bunch of budget phones with some models selling for as little as $20… but the only reason they were quite so cheap is because they’re carried-locked and designed for use with specific pre-paid carriers.

That said, it looks like you can basically assemble your own smartphone from $20 in parts. Well, kind of. 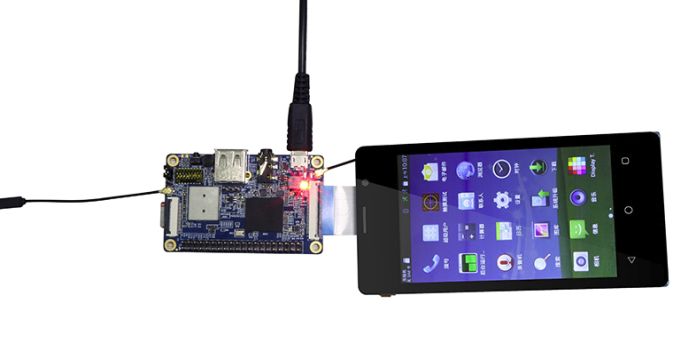 Two things to note before you go any further:

That said, you get a bit of versatility from building your own device, including support for Android or GNU/Linux-based operating systems.

So here’s the deal: the maker of the Orange Pi line of single-board computers recently launched a model called the Orange Pi 2G-IoT. It sells for just $10 (plus shipping), and as the name suggests, it has a built-in 2G cellular modem.

Now the company has also released a toucshcreen display that you can connect to the Orange Pi 2G-IoT. It also sells for $10, and comes in two versions: one with black bezels and one with white.

The accessory features a 3.5 inch, 800 x 480 pixel TFT display. Like I said, it’s not very good. But it does basically transform Orange Pi’s little screenless, case-less computer into a functional device with a display and touch input.

The Orange Pi 2G-IoT features a 32-bit ARM Cortex-A5 processor, WiFi, Bluetooth, a microSD card slot, a USB 2.0 port, a mic and speaker, and an LCD connector, as well as a 40-pin header and a few other developer-centric features.

There’s also a micro USB port for power. You can pay a few bucks extra for a model that comes with a power supply or just use your own if you have one handy. Theoretically you could also use a USB battery pack, but there’s also a dedicated battery connector on the board… I’m just not sure that the device maker is selling a compatible battery yet.

Orange Pi provides Android 4.4, Raspbian, Ubuntu Server, and several other operating systems for the little computer. So even if you don’t plan to use it as a phone, you could pick one up for use as a DIY server and use the touchscreen display as a cheap monitor and/or input method.

But mostly I just find it intriguing that it’s not only possible to get a $20 smartphone buy purchasing a carrier-locked version, but also buy picking up a DIY set of tools and assembling your own model that’s capable of running a variety of open source software… even the end result in both cases is a relatively crappy phone.

Just keep in mind, you’ll probably end up spending a bit more than $20 on this particularly crappy phone once you account for things like a microSD card for storage, a battery of some sort, and some sort of case to hold the screen and mainboard together.