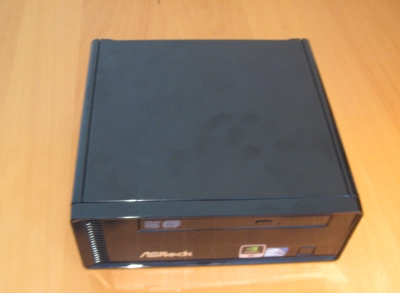 The ASRock ION 330 nettop is a small desktop PC that’s not much wider than a typical optical disc drive. It’s a bit chunkier than some nettops from MSI, Asus, and other companies, but unlike many of those models, the ION 330 actually makes room for a DVD burner as well as a 1.6GHz Intel Atom 330 dual core CPU, and NVIDIA ION graphics.

ASRock sells the ION 330 nettop as a barebones unit, which means that it comes with everything but the operating system. The model NVIDIA sent me to review came loaded with Windows 7 RC, but I’m not going to spend too much time dwelling on the software in this review.

The model I tested also had 2GB of RAM, a 320GB hard drive, Ethernet and HDMI ports, but no WiFi. Other versions of this nettop may be available with media center remote controls, WiFi, Blu-Ray drives, and other options.

The computer is a small box that bears a more than passing resemblance to a Mac Mini. It measures 7.7″ x 7.3″ x 2.8″ and weighs about 3.8 pounds. The computer is available in black or white. 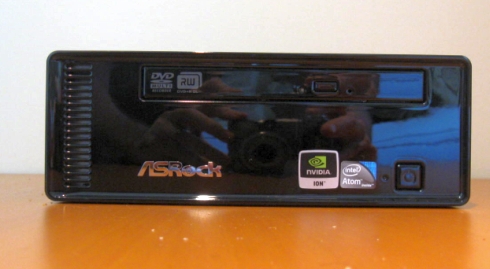 The front of the ASRock ION 330 features a power button that glows blue when the PC is on and a tray-style disc drive. And that’s about it. There’s nothing on the sides, top, or bottom.

There’s much more going on in the back of the unit, where you’ll find 6 USB ports, mic, Ethernet, VGA, HDMI, mic, line, headphone, and S/PDIF ports.

You can open the top of the computer case by removing two screws, but there’s not a lot of space on the inside, and the first thing you’ll be confronted with is the top of the disc drive. So if you want to spend some time modifying this nettop, you’re going to need to be able to maneuver in a pretty tight space. 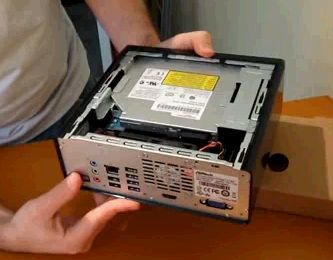 After opening up the ASRock ION 330 once, I went ahead and closed the lid and decided to test the computer as is.

The ASRock ION 330 isn’t a speed demon, and it wasn’t designed to be one. While the dual core Intel Atom 330 CPU gives this nettop a bit of a boost over a system with a single core Atom processor in some areas, in others the difference is barely noticeable. The Windows Experience Index for the computer is well above the netbook average. But as with most netbooks and nettops, it’s the CPU that receives the lowest score, thus dragging down the performance rating to 3.3

The computer is more than capable of handling day to day tasks such as surfing the web with multiple browser tabs open. It can also handle some light weight multitasking, such as running an audio player in the background while surfing the web and editing a document.

But where things get really interesting is when you look at applications and benchmarks that can take advantage of dual core processors. For instance, the Cinebench benchmarking utility consists of three tests. The first test looks at OpenGL 3D graphics performance. The remaining tests involve rendering a high quality image. The test is run once using a single CPU, and then run again using multiple CPUs. Higher scores are better. 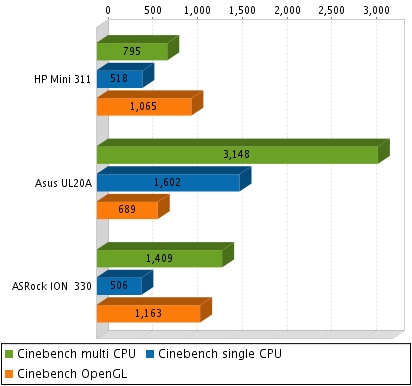 As you can see, the ASRock ION 330 with its dual core processor scored much HP Mini 311 with a single core Atom N270 CPU. But neither came close to the score notched by the Asus UL20A, a computer with a much faster Core 2 Duo SU7300 processor.

Likewise, when I ran the PassMark Performance 7 benchmark, the ASRock wiped the floor with the HP Mini 311 in the CPU test, but the UL20A still came out on top. 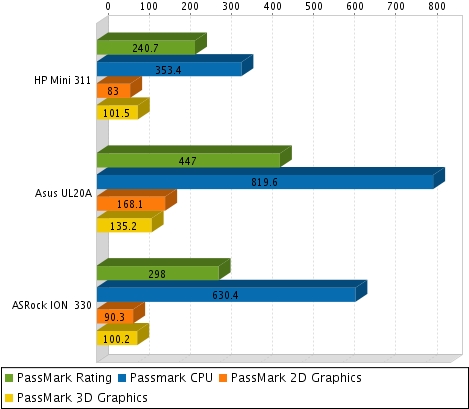 I wouldn’t put too much stock in the graphics scores in PassMark test, as I don’t think the benchmark plays nicely with the NVIDIA ION graphics.

In terms of real-world performance though, what do these benchmarks mean? To be honest, not that much. As I mentioned, the computer feels fairly snappy when surfing the web or editing documents. But to be honest, so do most computers with single-core Atom processors. And while some tasks will see marked improvement thanks to the dual core processor, others won’t.

I ran my standard battery of benchmarks on the ASRock ION 330 and a few similar computers including the HP Mini 311 which also has ION graphics, but a single core Atom N270 CPU and my aging Asus Eee PC 1000H with an Atom N270 CPU and integrated GMA 950 graphics (and an 18 month old hard drive, which explains the folder copy and zip scores). 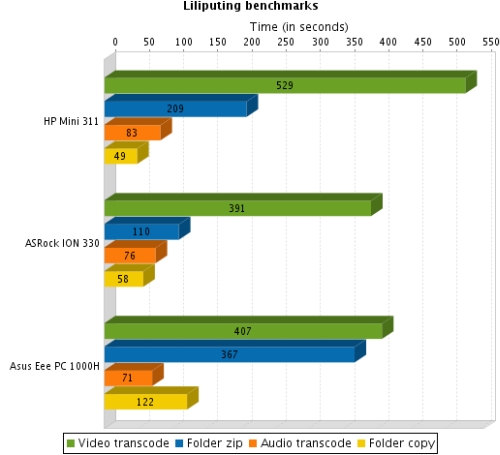 Here’s a brief summary of what these tests entail:

Finally, I timed the same three computers to see how long it would take to launch two of the slowest-loading programs I regularly use: OpenOffice.org and GIMP, an open source image editing application. 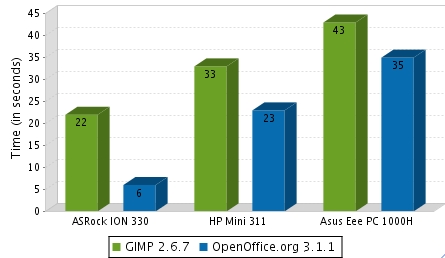 The ASRock ION 330 does appear to have a clear edge here, although it still takes a ridiculously long time to launch GIMP on any computer with an Atom processor.

Aside from the dual core Atom processor, the ASRock ION 330 has another trick up its sleeve. Like the HP Mini 311 mentioned above, it has NVIDIA ION graphics. That means this nettop an handle many relatively recent games with 3D graphics as well as 1080p HD video playback. Although the model featured in this review comes with a DVD drive, the ION chipset is also capable of decoding Blu-Ray discs if you happen to have a Blu-Ray drive.

In terms of 3D graphics performance, the ASRock ION scored higher in the 3DMark06 benchmark than either the Asus UL20A with integrated GMA 3150 graphics or the HP Mini 311 with ION graphics but a single core CPU.

The ION chipset also helps out when you’re running software that can take advantage of GPU acceleration features of NVIDIA’s CUDA platform. That includes HD Flash video playback using Adobe Flash Player 10.1 beta. I was able to stream several 720p and 1080p HD Flash video clips from YouTube on this system while connected to a 1280 x 1024 pixel monitor.

I also ran another video transcoding test using MediaCoder, which has a CUDA encoder for H.264 videos. In other words, while the test in the previous section shows how long it takes to transcode a video from an uncompressed AVI file to an Xvid file using an application that relies solely on the CPU, this test shows how much faster a similar job goes when using a GPU accelerated encoder.

The long and short of it is, the dual core processor helps a lot with CPU-intensive tasks that take advantage of both cores. It helps even more if you’re using an application which can use both a dual core CPU and NVIDIA’s CUDA technology to really speed things up. You’d need a computer with a much faster processor if you wanted to be able to transcode a4:34 video file in just 2:23 without GPU acceleration.

Oh yeah, it can play games too. I’m not very good at the style of games that really show off the 3D graphics capabilities, but here’s a shot from the beginning of Portal, which played quite smoothly: 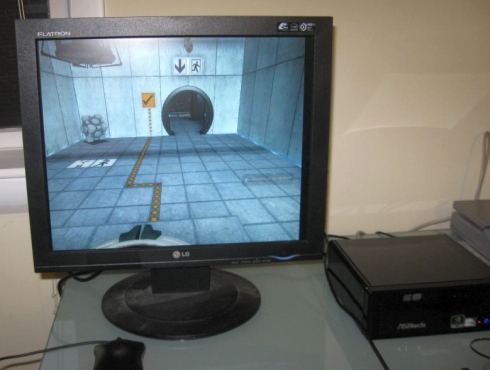 That’s the ASRock ION 330 sitting in the lower right corner next to my 17″ display. I also tested out browser-based Battlefield Heroes, and despite some slow load times which I attribute to the internet connection, it also played quite nicely. 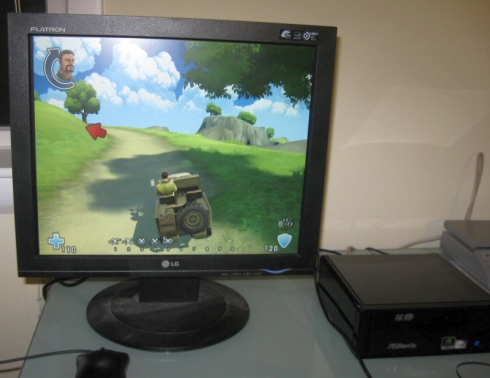 While the ASRock ION 330 isn’t exactly a high end gaming rig, it certainly has enough oomph in the graphics department to handle games that would choke up a netbook or nettop with an Atom N270 CPU and integrated GMA 950 graphics.

The machine also has more than enough oomph to function as a home theater PC, or HTPC. 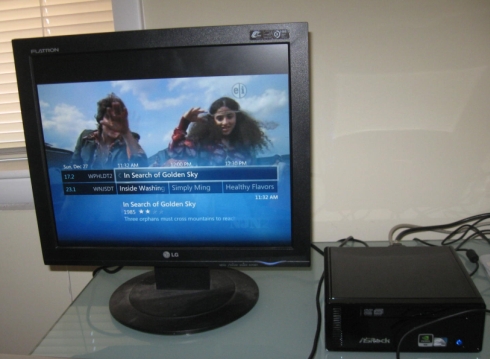 I tested the ASRock ION 330 with an ATSC TV tuner and a digital antenna, and while the reception in my office is pretty horrid, I was able to pick up a few signals from my area public television station. The nettop had no problems playing or recording live TV, and the transitions and other visual effects in Windows Media Center looked great.

Using Adobe Flash Player 10.1 beta, I was also able to stream Flash video in full screen mode without any stuttering. That’s something that most computers with Intel Atom processors struggle with when you add a high resolution display. You can check out a video of the ASRock ION 330 functioning as a media center PC here.

The ASRock ION 330 isn’t the cheapest nettop around. With prices regularly exceeding $400 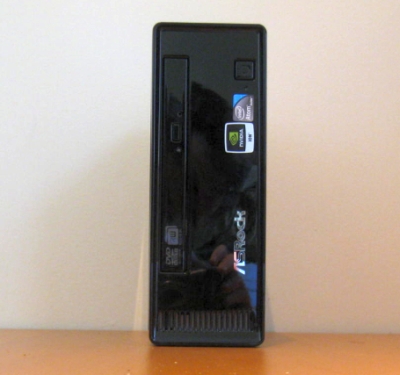 With CES just around the corner, you can expect a flood of new mini-desktops with the updated Intel Atom D410 and D510 processors. But while these systems will likely consume less power than the Atom 330 chip found in the ASRock ION 330, overall performance should be similar.

If you’re in the market for a small form factor machine for basic desktop computing, light weight gaming, or for turning into a home theater PC you might want to wait a few weeks to see if something better comes along. But as long as you don’t expect miracles from a low power machine like the ION 330, I don’t think you’d be disappointed if you picked one up without waiting to get a model with a new CPU.