It’s called the ASRock Beebox, and according to Hungarian website iPon, it’ll probably be available in select markets starting in June or July. 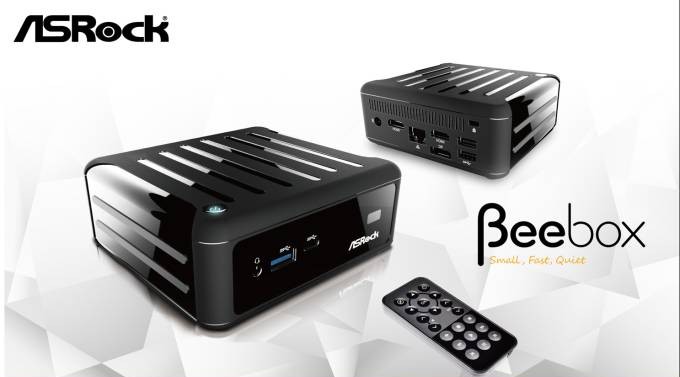 The Beebox is about the same size as an Intel NUC mini-computer, measuring about 4.7″ x 4.3″ x 1.8″. But while most NUC systems feature fans to keep the processor from overheating, the Beebox uses a 4 watt Intel “Braswell” processor which doesn’t produce a lot of heat and features a case designed to dissipate heat without any fans.

While the fanless design is nifty, it’s not the only thing that helps set the Beebox apart from some earlier mini-desktops. It also features a Type-C USB 3.0 port, a well as a three other regular-sized USB 3.0 ports, Ethernet, dual HDMI ports, DisplayPort, a headset jack, and 802.11ac WiFi and Bluetooth 4.0.

The computer has two SODIMM slots for up to 8GB Of RAM, and there’s room for an mSATA SSD and/or a 2.5 inch SATA drive.

ASRock may offer several models: iPon has obtained slides showing a model with 2GB of RAM, 32GB or storage and Windows 8.1 with Bing software and a another model with 4GB of RAM, 128GB of storage, and no operating system. There’s also a barebones model that comes with no memory or storage: you’ll have to supply your own..

No prices have been been announced yet.