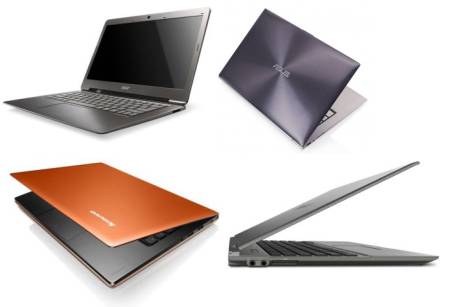 Intel is predicting that ultrabooks could make up as much as 40 percent of all laptop sales by the end of 2012. That’s a pretty bold guess, considering there are only a handful of notebooks that meet Intel’s definition of an ultrabook on the market today. But that could change by January. PC Pro reports that between 30 and 50 new ultrabooks could launch at the Consumer Electronics Show in January.

An ultrabook is a thin and light laptop which typically weighs around 3 pounds or less and is less than 0.8 inches thick. They tend to have high performance (and low power) solid state disks, quick-resume technology, and the latest Intel Core i-series chips.

Eventually Intel hopes to add tablet features to the platform including touchscreen displays.

This isn’t the first time Intel has pushed a platform for portable laptops which offer better-than-netbook performance. A few years ago the company launched a line of ULV (Ultra Low Voltage) chips for laptops. They haven’t really grabbed much market share, which is at least in part because they fill an odd niche – they can calculate circles around a netbook-class Intel Atom chip, but they’re not as powerful as the processors found in most laptop computers sold today.

Ultrabooks are designed not just to be portable, but also powerful. Thus Intel and its partners are hoping to justify the relatively high cost of these computer by positioning them as the only laptop a customer needs.

Right now the cheapest ultrabooks still cost $799 and up, which makes them fairly expensive for laptops. But as more PC makers enter the ultrabook space the cost of components will fall which will help bring down prices… assuming customers buy enough of the thin and light computers to make a dent.