The next version of Google Android will likely include a major change that average users won’t notice at all… unless they notice that apps generally run more quickly.

Google has been working on replacing the Dalvik virtual machine that powers Android apps with something called ART since last year. Now it looks like ART is just about ready for prime time.

Earlier this year, ART became the default runtime in the Android Open Source Project, but users could still switch to Dalvik. Now Dalvik has been removed altogether. 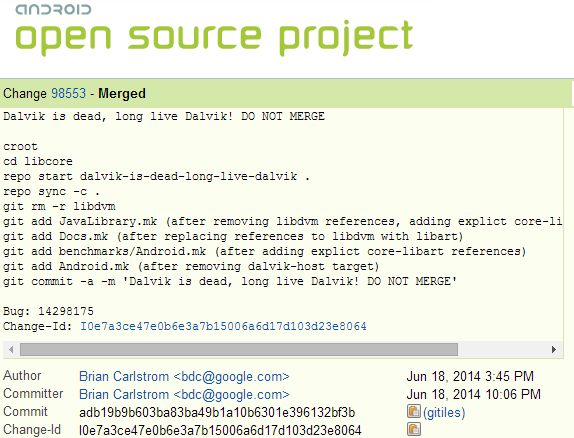 This means the first time you reboot your phone after updating to the next version of Android, you’ll probably be in for a long wait while all your apps compile… but after that certain apps should be able to run much more quickly. Other apps will probably function about the same on ART as they did on Dalvik.

The ART runtime has been available for testing for months and during its development there are some apps that might not have supported the framework. Hopefully by the time the next version of Android is released with ART enabled, the vast majority of Android apps will be supported.

One potential dealbreaker for folks with rooted phones and tablets has been that the Xposed framework doesn’t currently support ART. But developer rovo89 plans to update the framework soon so that users can continue to modify the behavior of their phones whether they’re using ART or Dalvik.