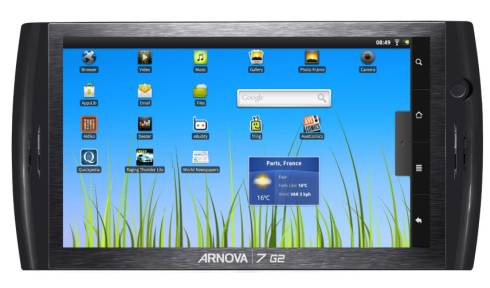 The Arnova 7 G2 is a budget tablet from French device maker Archos. The company introduced the tablet this summer, and now it’s available for purchased from Amazon for $199.99

Like many other Archos and Arnova tablets, the Arnova 7 G2 includes a built-in kickstand which you can use to prop up the device while you’re watching videos.

Archos also released a 10 inch tablet called the Arnova 10 G2 recently. That model has nearly identical specifications, but in addition to the larger screen it has a higher resolution display of 1024 x 600 pixels. The larger tablet also sells for $200.

On the one hand, you’d think the model with the lower screen resolution would be cheaper. On the other hand, not everyone wants a 10 inch tablet, so I suppose it’s nice to have a smaller version available at the same price.

Still, with Lenovo and Amazon also pricing new 7 inch tablets at a penny under $200, the Arnova 7 G2 doesn’t look quite as attractive today as it did when Archos introduced it this summer.