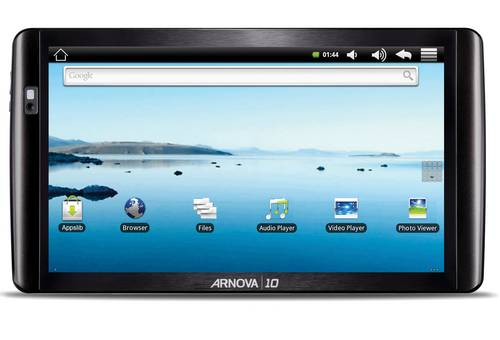 The Arnova 10 tablet is a low cost Android tablet with a 10 inch display and Android 2.1 operating system. The tablet sells for under $200 and has a resistive touch display and 4GB of storage. But if those last two bits of information are a turn-off, there’s a slightly better version of the tablet available now.

B&H is the first US retailer with a listing for the Arnova 10b tablet. It has a capacitive touchscreen display and 8GB of storage. It’s not clear if there are any other major differences between the new model and the original. B&H is selling the Arnova 10b for $230.

The tablet has a 1024 x 600 pixel display, 802.11b/g/ WiFi, a USB 2.0 port, and a microSDHC card slot. It can handle 720p video playback in a variety of formats, has integrated speakers, a mic, and a camera, and comes with the AppsLib app store installed.

There are also plenty of alternatives to the Android Market if you’re not happy with the AppsLib solution.

One reply on “Arnova 10b tablet gets a slight screen upgrade”