Most microprocessors are made using silicon. And most are rigid, which means that if you want to put them in flexible devices like folding phones or wearables, they’ll need to be placed in a section that doesn’t bend.

ARM has just unveiled a new PlasticARM chip that bucks both trends. It’s a natively flexible processor made with plastic instead of silicon. 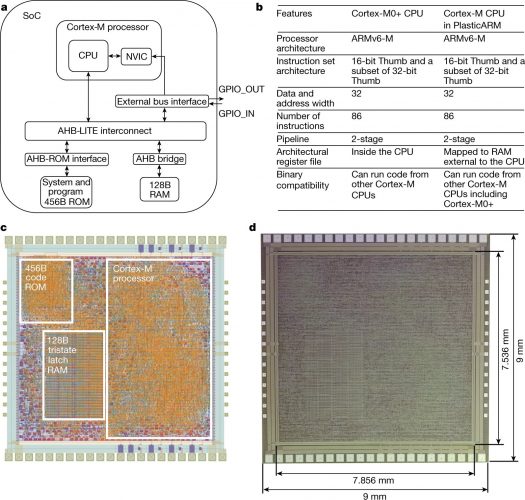 ARM says plastic could be much cheaper to produce, while their flexible nature would allow them to be used in different sorts of applications. They can be used with paper, plastic, or metal foil substrates. So not only are we looking at a chip technology that could be used for wearable devices like smartwatches and foldable phones, but also for food packaging, bandages or other wearable medical devices, and all sorts of other applications.

ARM claims that despite those rather basic features, the chip is “twelve times more complex than the previous state-of-the-art flexible electronics.”

You can find more details in a paper that ARM engineers have submitted to the science journal Nature, titled “A natively flexible 32-bit Arm microprocessor.”

This ultra-minimalist Arm Cortex-M0 based SoC could enable billions of low-cost microprocessors to be embedded into everyday objects.