Processors based on ARM’s new Cortex-A72 designs may not be shipping yet, but the company is already working on the technology that will eventually replace high-end designs… as well as its mid-range and entry-level designs.

A series of leaked slides could provide an early look at ARM’s roadmap for the next year or two. 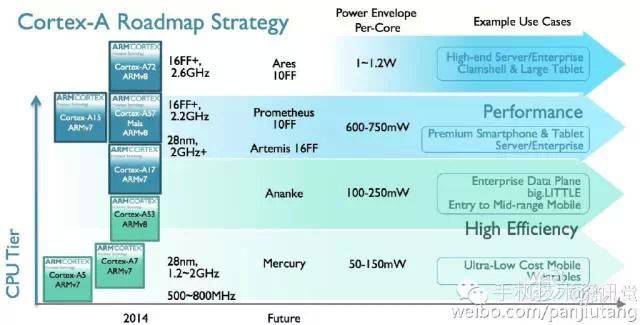 According to the slides, ARM’s highest-performance chips will use a 10nm manufacturing processor. The upcoming “Ares” chip will be a relatively power-hungry chip for ARM, with up to 1.2 watts of power consumed by each processor core. The slide says these chips will be designed for servers, notebooks, and large tablets.

More efficient “Prometheus” and “Artemis” chips are aimed at smartphones and tablets, and use around 600 to 750 mW per core. These chips will be replacements for processors based on current ARM Cortex-A57 and Cortex-A15 designs.

Replacing the more energy-efficient Corex-A17 and Cortex-A53 processors will be new chips code-named “Ananke” and “Mercury,” and they’ll use 100-250 mW per core and 50-150mW, respectively. These chips will be used for entry and mid-range devices, wearables, and as the low-power companion cores for higher-performance cores in chips that use ARM’s big.LITTLE technology.

Keep in mind, ARM creates designs for processors but the company doesn’t actually produce its own chips. Look to companies like Qualcomm, Samsung, and NVIDIA to launch new processors based on these designs in the coming years.