The new ARM Cortex-A76 architecture could bring up to a 35 percent performance boost over chips based on Cortex-A75 designs. The new ARM Mali-G76 GPU technology offers up to 30 percent better efficiency than its predecessor. And the new ARM Mali-V76 VPU is the company’s first video processor designed to support 8K video processing.

ARM says we should see new chips featuring these technologies in 2019. 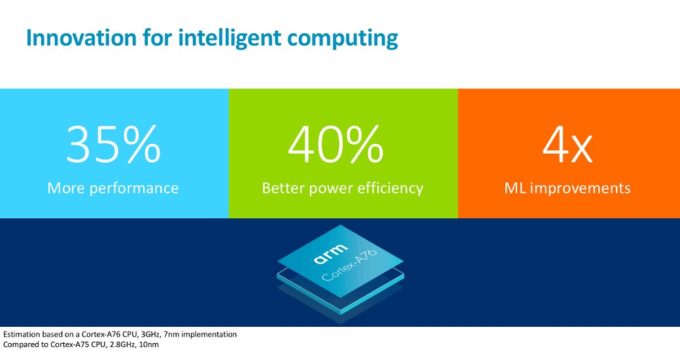 And ARM says Cortex-A76 is also designed to bring up to 4 times better performance for artificial intelligence and machine learning tasks.

ARM notes that Cortex-A76 processors manufactured using a 7nm process should be able to run at speeds of 3 GHz or higher, and the company is promising “laptop-class performance.”

Of course, any chip that’s already use in a laptop technically offers laptop-class performance, and there are already a bunch of Chromebooks and a handful of Windows 10 devices with processors based on older ARM designs. But they’re not very fast compared to models with anything higher than an Intel Celeron chip.

Here’s what’s new: not only is ARM promising a 35-percent performance boost over its older Cortex-A75 design, the company says Cortex-A76 will offer twice the performance of an older ARM Cortex-A73 processor. And you know what uses a modified Cortex-A73 design? The Qualcomm Snapdragon 835 chip that’s used in every Windows 10 on ARM notebook or tablet released to date.

So next year we might plausibly see Windows 10 on ARM devices that can offer up to twice the performance of current models.

The new video processor has to handle 4 times the bandwidth of its predecessor in order to play 8K video at 60 frames per second. So ARM made changes to increase throughput.

The VPU is also capable of encoding 8K video, but only at 30 frames per second so far.