ARM is introducing a series of new chip designs for the coming year that the company says will bring stronger CPU, graphics, and AI performance and reduced power consumption.

The new ARM Cortex-A78 CPU, Mali-G78 and Mali-G68 GPU, and Ethos-N78 neural processing unit are likely to show up in devices shipping next year, if not sooner. 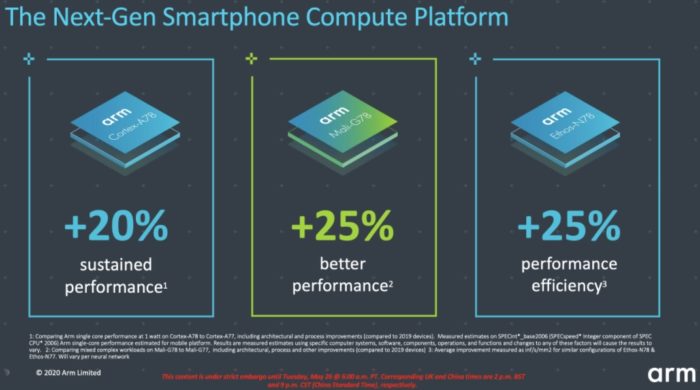 ARM says a 5nm ARM Cortex-A78 CPU offers 20-percent better sustained performance than a previous-gen Cortex-A77 core while consuming the same amount of power. In this case, “sustained” performance indicates that you’re less likely to see speeds drop at the processor gets hot.

The company says Cortex-A78 chips can also offer up to a 30-percent boost in peak single-core performance when used with ARM’s new Cortex-X1 custom program. (Anandtech takes a deeper dive into Cortex-X1, which is basically a high-performance implementation of Cortex-A78 technology that isn’t bound by the same power constraints).

And as usual, these high-performance CPU cores can be combined with lower-performance, more energy-efficient CPU cores in the same chip. In this case, ARM says you may see big.LITTLE chips that combine Cortex-A78 and Cortex-A55 cores.

ARM is promising up to a 25-percent performance boost in its new flagship-class Mali-G78 GPU, while using less power than its predecessors. The GPU also supports between 7 and 24 graphics cores.

The chip designer is also introducing a “sub-flagship” version called Mali-G68 which has many of the same features, but tops out at 6 graphics cores. ARM says we’ll see “sub-flagship” devices with Mali-G68 graphics in 2021.

According to ARM, compared with the previous-gen Ethos-N77 NPU, we can expect: 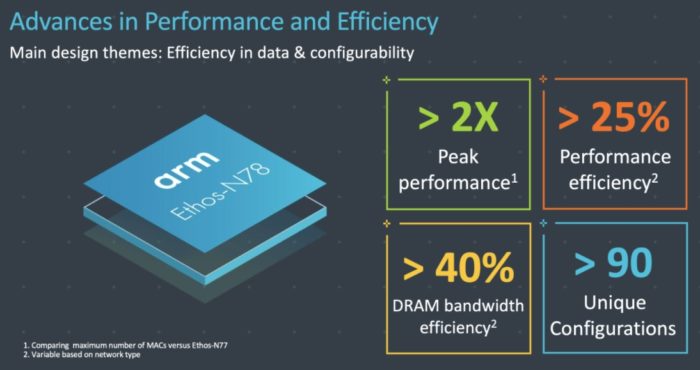