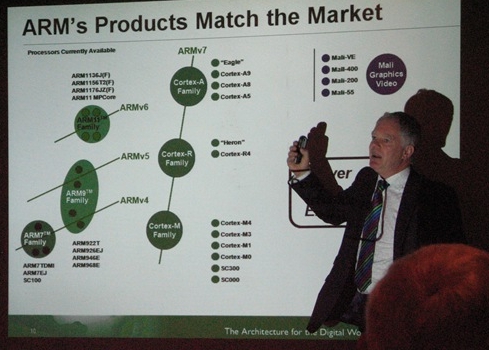 Chip designer ARM has sort of pre-announced plans for a new “Eagle” platform which will power high-end devices in the future. ARM isn’t providing details about the upcoming chipset, but it will be an ARMv7 chip, and it hung out above the ARM Cotex-A9, A8, and A5 platforms in a slide ARM presented at a pre-Computex news conference today.

So it seems safe to say that we should be able to expect a bit of a performance boost out of Eagle-powered devices.

At that same press conference, Engadget spotted a number of tablets with ARM-based processors, including a few we’ve seen before at other events, as well as a few new goodies. You can check out some of the ARM-based tablets in Engadget’s photo gallery.