The first Chromebooks with ARM-based processors hit the streets a few years ago, and this year we saw the first Windows laptops and tablets with Qualcomm Snapdragon 835 chips based on ARM architecture.

But for the most part ARM hasn’t really been targeting the traditional PC space, instead focusing on technology for smartphones, tablets, servers, and IoT devices.

Now that’s changing. ARM has outlined a “client computing CPU roadmap” for the next few years, and that company is clearly positioning its upcoming chip designs as competition for Intel and AMD. 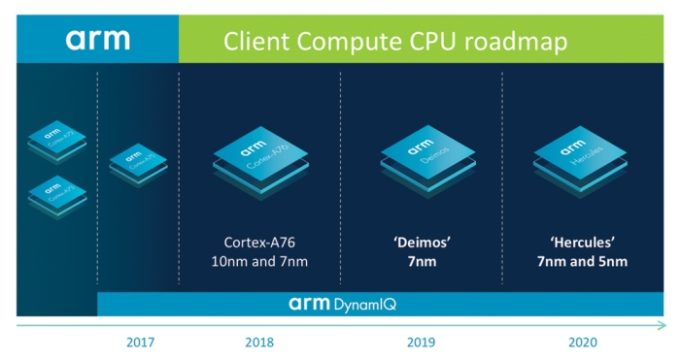 ARM doesn’t actually manufacture its own processors. Instead the company licenses chip designs to companies like Qualcomm, Samsung, Apple, and NVIDIA.

In fact, there’s nothing stopping Intel and AMD from licensing ARM designs, and they’ve been known to do that from time to time. But for the most part Intel and AMD’s chips are based on x86 architecture, which has traditionally outperformed ARM architecture in the desktop and laptop space.

So what’s next from ARM? The company says its Cortex-A76 architecture is already competitive with an Intel Core i5-7300U processor at some (very specific) tasks, while consuming less power.

Deimos chips will be manufactured using a 7nm processor, while Hercules chips can be 7nm or 5nm processors.

Generally speaking ARM-based chips have a well-earned reputation for consuming less power than their Intel and AMD counterparts, which means you can expect laptops powered by the upcoming chips to offer long battery life and feature thin, light, and probably fanless designs. The chips also often have integrated graphics and built-in support for WiFi, Bluetooth, and cellular connectivity, which reduces the need for multi-chip solutions.

That said, it’s not like Intel and AMD are sitting still waiting for ARM to catch up. Intel’s Gemini Lake Celeron and Pentium processors are low-power chips for low-end computers that tend to use around 5 watts of power, and the company’s Core Y-series chips are higher-performance (and higher-priced) 4.5 watt processors based on architecture more closely related to the company’s 15 watt U-series chips.

All of which is to say, if battery life is your sole concern, you can already find plenty of thin and light Intel-powered computers that offer 8-10 hours of battery life. And AMD’s new(ish) Ryzen Mobile processors for laptops use between 12W and 25W while offering performance that’s competitive with Intel’s U-series chips.

Still, as Intel and AMD duke it out in the top-of-the-line, multi-core desktop CPU race, it’s interesting to see the companies are facing increased competition at the low-power end of the spectrum from ARM.

It remains to be seen whether any chip makers other than Qualcomm plan to adapt ARM’s designs for upcoming Windows laptops, but we’ve already seen several chip makers including Rockchip, MediaTek, and Samsung produce ARM-based processors for Chromebooks.