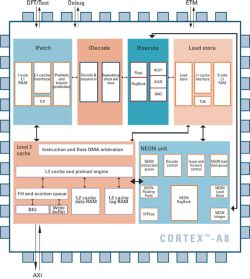 Right now two chip makers dominate the netbook market: Intel and VIA. Almost every netbook on the market today uses an Intel Atom, Intel Celeron, or VIA C7-M CPU. Sure, there are a few outliers using the AMD Geode, or Loongson chips. But they’re in the minority.

Now it looks like chip maker ARM is hoping to give Intel and VIA some competition. The company says that its Cortex-A8 and Cortex-A9 chips will be used in upcoming netbooks. ARM processors are typically found in cellphones and PDAs, but ARM believes its newest chips will be powerful enough to run the kind of programs you’d expect to run on a low power ultraportable laptop.

The next generation ARM Cortex-A8 and Cortex-A9 processors are capable of “gigahertz speeds,” which makes them a bit faster than current ARM chips.

The company is apparently already working with some netbook makers, but isn’t ready to name names.