While Arm doesn’t actually product its own hardware, it licenses its designs to companies including Qualcomm, Apple, Samsung, and (until recently) Huawei — so we could see these technologies in future chips from those companies (possibly excluding Huawei). 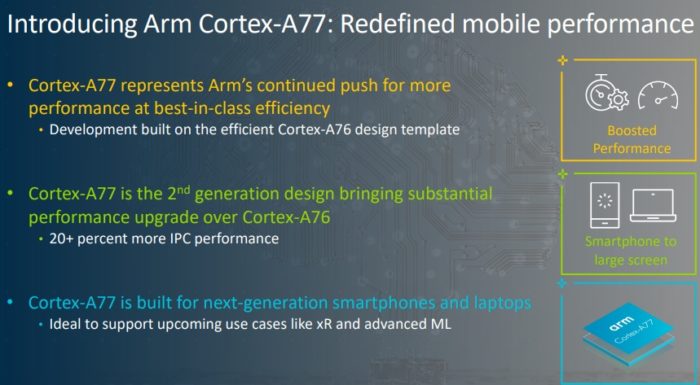 The latest CPU is said to offer at least a 20 percent boost in IPC (instructions per cycle) performance compared to the previous-gen Cortex-A76 design, while offering similar power efficiency.

The company also points out that 7nm Cortex-A77 chips offer more than four times the performance of a 28nm Cortex-A15 CPU from 2013.

Arm says this chip is designed not only for next-gen smartphones, but also for laptop computers… a market that’s increasingly relevant to Arm as we see a growing number of Chromebooks and even Windows laptops and tablets powered by chips that use Arm architecture.

As smartphones and computers continue to make use of artificial intelligence for things like scene recognition in photography or object recognition in augmented reality, we’ve seen a number of companies build dedicated Neural Processing Units to handle those tasks, reducing the strain placed on CPUs and GPUs.

Arm says its newest NPU offers up to twice the energy efficiency and up to three times the memory compression of its previous version. Combined with the open source Arm NN software framework, the company says that an octa-core version of the chip could offer performance up to 32 TOP/s.