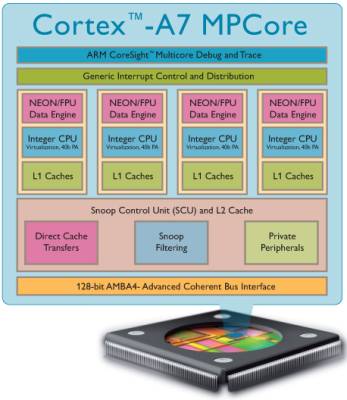 Chip designer ARM has introduced a new platform for low power chips that are 20 percent the size of ARM Cortex-A8 processors… and which use only about 20 percent as much power.

The new ARM Cortex-A7 processors are designed to power low cost, entry level smartphones and other mobile devices. While ARM says the chips will show up in smartphones that cost less than $100, we won’t actually see devices with the new chips until 2013 or 2014 — and at that point ARM says that the new chips will be able to provide performance similar to what we’d expect from today’s high-end smartphones.

ARM is partnering with Broadcom, Freescale, Samsung, Texas Instruments and other chip makers, which means that we could see a wide range of Cortex-A7 chips in the coming years. Those chips will be available in single and multi-core varieties. 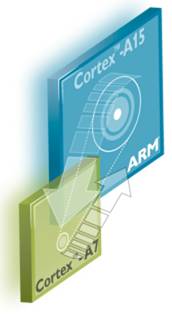 ARM is also introducing a new technology called Big.LITTLE which combines multiple processors. For instance, you could have a device that uses both a low power ARM Cortex-A7 single chip and a higher power Cortex-A9 or Cortex-A15 multi-core processor. When you need the high performance chip, it kicks into gear, but the lower power Cortex-A7 processor can handle basic duties such as audio playback or grabbing your latest social network updates.

That could lead to high-powered devices with extra-long battery life.

NVIDIA has announced that its upcoming Kal-El processor will use similar technology by pairing a low power processor core with a higher-performance quad-core chip.