Chip designer ARM has unveiled three new(ish) CPU core designs that could power the flagship phones of 2023 and beyond.

The most powerful is the new ARM Cortex-X3 CPU core is expected to bring up to 25% better peak performance when compared with the previous-gen Cortex-X2. 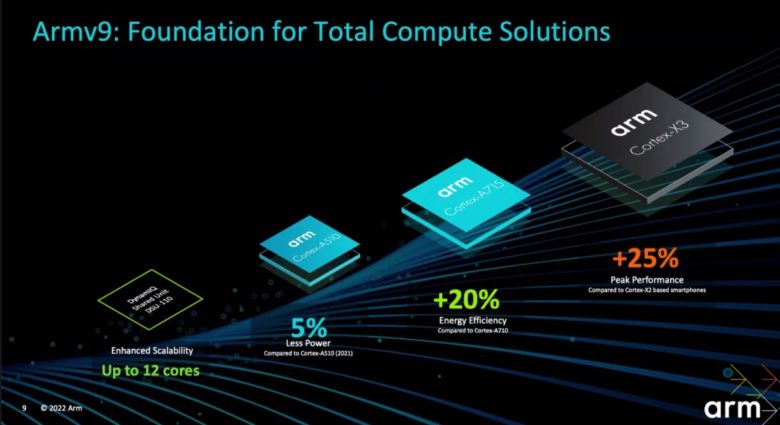 ARM says this is the third time the company has been able to deliver double-digit performance improvements to the Cortex-X series and support for speeds up to 3.3 GHz. But it’s also worth keeping in mind that most of the flagship-class smartphone chips we’ve seen to feature X series CPU cores have had just one or two of these cores, while relying on less powerful cores to help balance power consumption with performance.

With that in mind, ARM has also introduced a new Cortex-A715 CPU core, that the company says is 20% more efficient than the previous-gen Cortex-A710, while bringing 5% higher performance. While that might not seem like much, it’s enough to allow ARM to say that the Cortex-A715 delivers about the same level of performance as the Cortex-X1 CPU core unveiled a few years ago (and still used in some current-gen chips like the Google Tensor processor at the heart of the Pixel 6).

And the new Cortex-A510 CPU cores isn’t really all that new, which is why it shares a name with the energy-efficient CPU core that ARM unveiled last year. The new refreshed version is a little more efficient though, consuming about 5% less power.

ARM also notes that its Cortex-X3 CPU cores could be used for next-gen laptop or desktop chips or other higher-performance hardware. Without the same thermal constraints as thinner, lighter devices like tablets or phones, ARM says you could see chips that combine as many as 8 Cortex-X3 CPU cores and 4 Cortex-A715 cores for a high-performance 12-core chip.

via ARM and Android Authority