Chip designer ARM has announced that it’s next-generation chips should arrive in 2014. ARM Cortex-A50 chips will be the first ARM-based processors to feature 64-bit processing, and at launch there will be two versions — one aimed at significantly boosting performance, and the other at reducing power consumption. 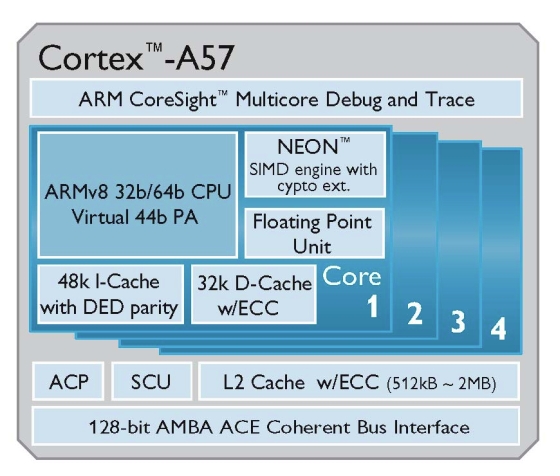 The new chips designs are the first to be based on ARMv8 architecture, and feature a 20nm design.

Companies including AMD, Broadcom, Calxeda, and HiSilicon are expected to develop products around the new platform.

This chip architecture is designed to offer 3 times the performance of today’s fastest ARM chips (based on Cortex-A15 designs) without increasing power consumption.

The chip designer is positioning ARM Cortex-A57 as the successor to Cortex-A15.

ARM’s Cortex-A53 design is a follow-up to the low power ARM Cortex-A7 architecture.

While this chip design isn’t as fast as the A57, it should provide similar performance to what we’ve come to expect from Cortex-A9 chips such as the NVIDIA Tegra, Sasmung Exynos 4, or TI OMAP 4 line of processors.

But Cortex-A53 processors will use only 25 percent as much power as those chips. That could lead to significant battery life improvements in smartphones and tablets (although screen, wireless radios, and other components will continue to suck power).