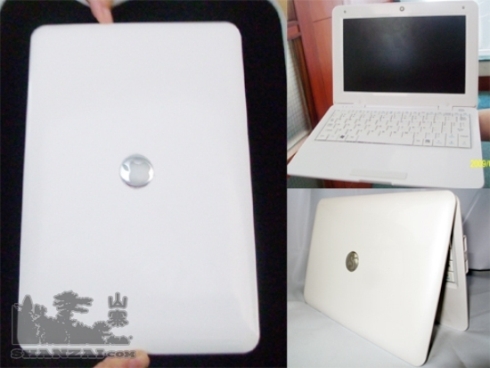 Hackers in the US have been slapping OS X on low power netbooks and occasionally carving an Apple logo into the lid for good measure for ages. But now an actual PC maker in China is cranking out an 8.9 inch netbook complete with an Apple logo on the lid… even though the odds of this device having any connection to Apple are none to none.

The laptop sports an ARM-based CPU and runs either Linux or Windows CE. So yeah, not so much with the OS X. And it reportedly sells for the equivalent of about $200. So not so much with the Apple. There’s also a Windows key on the keyboard (as well as a tiny right-shift key located to the right of the up-arrow, which will frustrate touch-typists).

Otherwise, it looks like a nice little machine. It weighs 1.7 pounds and measures just .2 inches at its thinnest point, (although it’s much thicker near the rear). According to Shanzai.com, the low power ARM CPU should help the laptop get 7 or 8 hours of battery life from a 3 cell battery, although I don’t know if that’s what the manufacturer is claiming or i that’s just the assumption the web site is making based on the fact that ARM CPUs tend to be low power.

What’s funny is that this isn’t the first time we’ve seen a Chinese manufacturer put out a computer with Apple branding and a CPU that’s not Intel or PowerPC-based. Earlier this year, a Hong Kong PC Maker posted a mockup of a Fakebook sporting a VIA Nano CPU.