Cloud services such as Gmail, SkyDrive, or Google Calendar can be handy. They let you access your data from nearly any device connected to the internet, whether you’re using your work PC, personal laptop, smartphone, or tablet. But relying on someone else’s cloud has its risks.

A team called the CitizenWeb Project is developing an operating system designed to make it easy to host your own cloud services using an inexpensive Raspberry Pi computer. It’s called arkOS, and it’s still very much a work in progress, but you can find more details and instructions for installing an alpha build at the arkOS website. 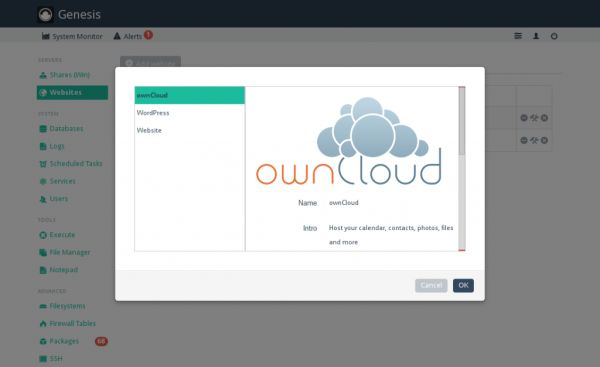 In the wake of the NSA spying revelations, some folks are concerned government agents could be reading their private email messages. And even if you’re not concerned about potential invasions of privacy, you’re at the mercy of Google, Microsoft, Yahoo, and other cloud service providers.

When Google decided to shut down Reader earlier this year, that move left millions of people without access to one of the most popular online news readers (albeit one of Google’s least popular products).

While many folks have just started using Feedly or other alternate RSS readers, some folks have decided to host their own cloud-based feed readers with Tiny Tiny RSS or similar tools rather than risk another shutdown of a third party service.

Unfortunately, setting up your own server and hosting your own email, website, cloud storage, or other service isn’t all that easy for most folks — especially if you want to run a server out of your house instead of renting space on someone else’s server.

The arkOS project is designed to make the process as simple as possible while giving users control over their own data. The project is based on open source software, which also let advanced users contribute to development and keep the project honest.

The operating system is based on Arch Linux, which has a reputation for being tough to setup and configure. But since arkOS is designed to run on a single computer — the $35 Raspberry Pi — all you have to do is run an installer app on your PC, insert an SD card which will be prepared, and then boot your Raspberry Pi from that card.

Once you’ve done that, you can access the Genesis graphical user interface for installing apps and modifying or customizing your system. Genesis lets you install apps such as WordPress or OwnCloud, which let you do things like set up a website, RSS reader, file server, or other cloud service.

Genesis can also run on Ubuntu, Debian, Fedora, or other Linux distributions, but it was designed for arkOS, and it’s a key part of simplifying the process of setting up your personal cloud.

It could be a while before we see a beta release of arkOS, let alone a full release. But I like where the developers are going with this. While you might not want to host a website that gets more than a million unique visits a month like Liliputing using a Raspberry Pi and your home internet connection, you could easily host smaller sites using this kind of setup.

More importantly, while it takes a lot of storage, bandwidth, and processing power to provide web apps like Google Docs, Gmail, Feedly, or SkyDrive to millions of users, if you and your family members are the only people accessing your personal cloud server, a low-power Raspberry Pi really might be all you need.

via Slashdot and TechWorld