Augmented reality apps have been around for almost as long as smartphones with cameras have been around. But lately they’ve started to get really good thanks to advanced technologies like Google’s Project Tango which uses software and hardware to mix virtual objects and real-world settings in cool ways.

But there are only a few devices that support Tango at the moment, and there aren’t a lot of apps for the platform yet.

Now Apple is getting ready to launch its own augmented reality platform, and early reports suggest it’s nearly as good as Tango… and doesn’t require any special hardware. 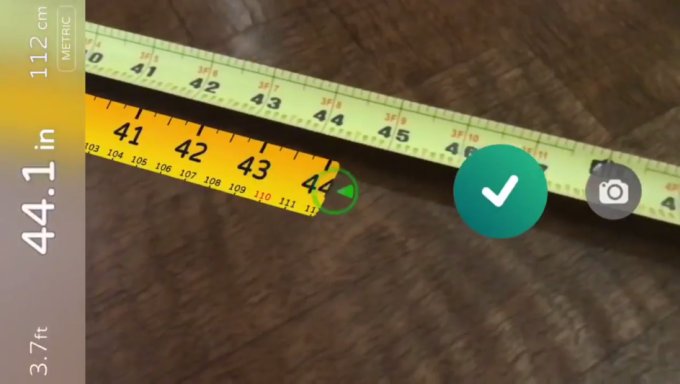 That’s because Apple’s ARKit uses software to create 3D maps of your physical environment using just the sensors that are already in an iPhone or iPad. So while future Apple hardware may have additional cameras or sensors designed specifically for ARKit, you don’t need a new device to use it. Any recent iOS device should suffice.

ARKit will officially ship with iOS 11, but Apple has released a developer preview, and developers have already created a range of pretty cool applications.

For instance, here’s a measuring tape app which doesn’t just show you the distance between two points… it literally looks like you’re rolling out a measuring tape as you move your phone’s camera. What’s particularly cool about that is that it makes it easy to see just how well the app works: because you can run your virtual measuring tape next to a real-world one and see the numbers match up.

? BOOM ? And just like that we have #ARKit measurement app number 2 https://t.co/cjfQMpHmx0 → by @laanlabs ? pic.twitter.com/U8QKFjiMXs

Here’s another app. It lets you draw a word in the air above a fixed location in space. Then you can move around it to see it from any angle. It stays in the same place no matter where you camera is pointing.

How about an app that lets you view a rocket landing in your backyard? This one uses real footage of the Falcon 9 landing to bring the SpaceX rocket to you, wherever you are

How about a tour of Vincent Van Gogh’s bedroom… on your tabletop?

And of course, there are gaming possibilities. here’s a game that lets you shoot Space Invaders-style aliens that appear as you wander through your physical environment.

A relatively new Twitter account called Made with ARKit is highlighting some of the cool things developers have already started to build with Apple’s new augmented reality tools. It’s worth checking out for additional examples. Or just do a YouTube search for ARKit.

I’m still a bit unsure if this type of augmented reality will move beyond the cool gimmick phase and turn into something that you actually use on a daily basis. But then, one of the most popular mobile games of 2016 was basically an augmented reality experience for smartphone users.

I can’t help but think that augmented reality on smartphones is still an intermediate step toward a future where mixed reality headsets like Microsoft’s HoloLens allows us to experience a blend of real and virtual worlds without holding our phones up to our faces.

via The Verge and Mike Cane