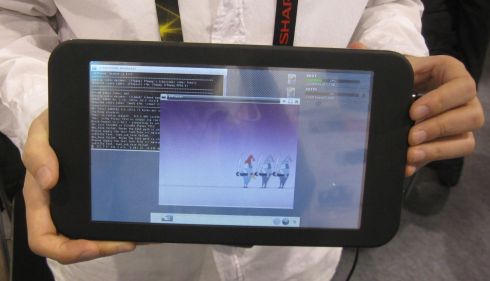 One of the best kept secrets of the annual Consumer Electronics Show in Vegas is the International Gateway. This is the area where companies from around the globe, but primarily from China, Taiwan, and Korea show their wares and try to attract US partners to distribute their products in the States. Last year, netbooks were one of the hottest products in the International Gateway. This year, there are still some netbooks, but not nearly as many. And the ones that are on display don’t look that different from the ones that were shown last year.

What is new is the proliferation of tablets. These little touchscreen devices are popping up all over the place. Some run Linux or Google Android while others appear to have custom user interfaces. Not all of these tablets are destined to be web-surfing buddies for the couch the way that netbooks and smartbooks are though. Some of the tablets are basically portable media players or even portable TVs, thanks to built in digital TV tuners.

I also find it’s sometimes hard to tell at first whether you’re looking at a tablet designed for handheld use or one that’s meant to be an in-car entertainment system. Honestly, all these screens without keyboards are starting to look alike to me.

The tablet pictured above comes from a company named Echo Technology. It sports a 520MHz ARM Cortex-A8 processor with OpenGL 3D acceleration, 128MB of RAM, and 8GB or 16GB of flash storage that can be expanded via an SDHC card. It packs 802.11b/g WiFI and has an 8.9 inch, 1024 x 600 pixel resistive touchscreen display. It weighs just 1.3 pounds and measures 0.7 inches thick. It can run Windows XP CE, Google Android, or Ubuntu Linux.

Tablets aren’t just hot in the International Gateway. NVIDIA is pushing its Tegra 2 platform which could end up powering dozens of tablets in the not too distant future. And we’re also starting to see tablet designs using Freescale and Qualcomm’s ARM-based platforms. Some of the hottest products includes the Freescale smartbook reference design, the ICD Ultra tablet with Tegra 2, MSI’s new tablet, and the Notion Ink Adam.

I personally like a device with a decent keyboard. But after wandering around Vegas trying to cover CES with a laptop that I have to keep pulling out of my bag and opening up to use while sitting down, I’m definitely seeing the appeal of smartphones and tablet-style devices that you can use while standing up.

You can see more tablets from the International Gateway after the break.

5 replies on “Are tablets the new netbooks?”