When Google introduces Chrome OS a few years ago, a lot of people wondered why they’d run an operating system based around a browser. Now a lot of people seem to be doing just that.

Bloomberg spoke to researchers at NPD, IDC, and Gartner, and reports that analysts say up to a quarter of laptops sold for less than $300 in the past 8 months were Chromebooks, Chrome OS laptops make up around 4 to 5 percent of the notebook market in the US right now, and they’re the fastest-growing segment of the PC industry. 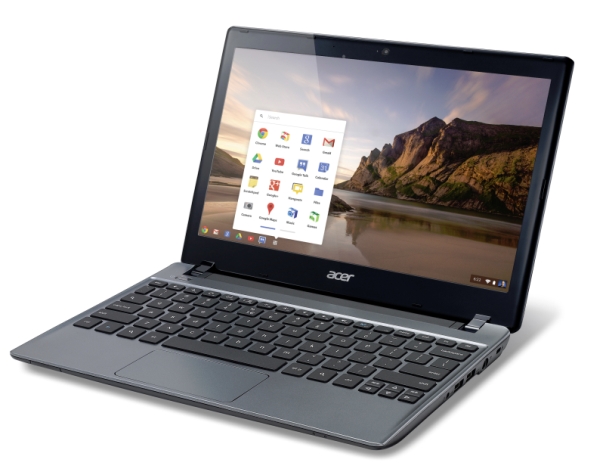 That might not be shocking news to anyone who’s kept an eye on the Chromebook space over the last few years. While the earliest Chromebooks sold for for $430 and up, today you can pick one up for about half that price

Chromebooks are also now available in more stores and more countries than before, and a growing number of PC makers are offering Chrome OS devices. While Acer and Samsung have been on board since the beginning, you can now buy Chromebooks from Lenovo and HP as well.

A big part of the appeal of these device are the low prices. But you can find plenty of Windows laptops for less than $300. What’s tougher to find is a decent Windows laptop which is portable, gets decent battery life, and performs well.

While not all Chromebooks are super-speedy, they generally boot quickly, get at least 4 hours of battery life, and run most web apps pretty well. They’re also reasonably secure since most “apps” you run aren’t actually saved to your local storage. And since most of your settings and data are stored online, a Chromebook makes a nice secondary computer because you can usually pick up exactly where you left off by opening the Chrome browser on your Windows, Mac, or Linux computer.

Google clearly doesn’t think Chrome OS is only good for cheap laptops. The company’s Chromebook Pixel is a $1299 testimony to the idea that Chrome OS can run on premium hardware. But while the Pixel is one of the nicest laptops I’ve reviewed in years (at least in terms of hardware), right now it seems like the sweet spot for Chrome OS is in laptops that sell for around $300 or less.

What do you think? Is Chrome OS here to stay? Or is its current success a fad that will fade away in time like the netbooks of yesteryear?

28 replies on “Are Chromebooks finally finding their stride?”