The Arduboy is a small handheld game console that uses open source code and which has a strong community of developers who have created 100+ games for the platform.

But the upcoming Arduboy Mini is smaller, more fragile, harder to use, and… kind of cool anyway. Arduboy creator Kevin Bates has shared an early look at the Arduboy Mini and says he plans to produce “a limited edition batch of these in 4 different color PCBs” for folks that want to buy one. 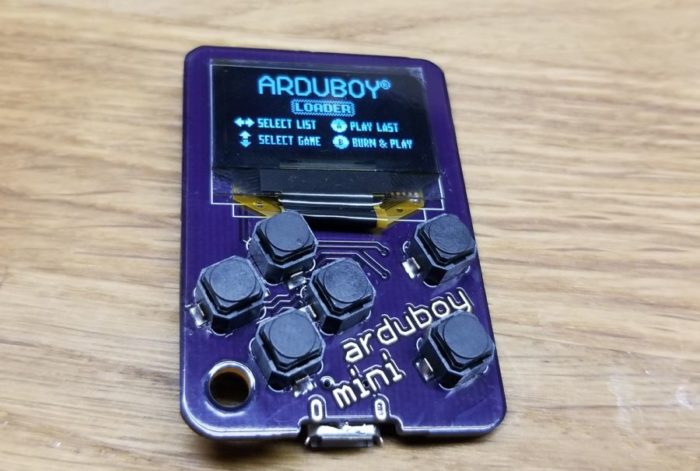 The mini version features an 0.96 inch OLED display and an external memory flash card capable of storing dozens of 8-bit games so you don’t need to reflash the firmware every time you want to change games.

It’s about half the height and width of a normal Arduboy, lacks some of the hardware (including a speaker), and features smaller buttons that are crammed closer to one another, making gameplay a little more awkward (although Bates insists the ergonomics aren’t as bad as they look).

There’s a hole in the PCB that you could theoretically use to attach the Arduboy Mini to a keychain… but that’s probably not a great idea unless you add a 3D-printed case or some other form of protection, since Bates notes that the device is fragile. It’s easy to imagine it getting damaged when jangling against your keys in your purse or pocket.

This is obviously a niche device that isn’t going to appeal to everyone. But Bates says the Arduboy Mini was partially built as a “design study to a smaller form factor,” and that he could eventually use what he’s learned to produce a similarly-sized Arduboy with an LCD display that could sell for as little as $5.