As expected, Archos is launching a virtual reality headset. And as expected, it’s basically a big, cheap device that lets you strap a smartphone to your face.

Archos VR Glasses will be available for purchase in November for $30. 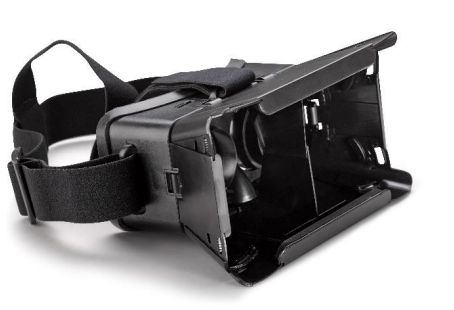 That’s not necessarily a bad thing. It means that your phone can act as the display and the brains of your virtual reality system. Fire up a compatible app on your phone, slide it into the Archos headset, and you can get the experience of watching a big-screen TV or playing an immersive game, among other activities.

Supported apps and phones will also be able to track your head movement to offer 360 degree videos that move as you change position. And if you pair the device with a Bluetooth game controller, you can play games while wearing the headset (Archos mentions it has its own game controller on the way).

Archos says its VR Glasses will support phones with screen sizes up to 6 inches, and will work with any operating system including Android, iOS, or Windows. That makes sense since, as I’ve already pointed out, Archos VR Glass doesn’t seem to involve any hardware. It’s basically a phone holder that you wear over your eyes.

It’s sort of like Google Cardboard… except it’s made of plastic. I don’t think the developers of the Oculus Rift have much to worry about.

4 replies on “Archos VR Glasses coming in November for $30”