The Archos TV Connect is an Android box that you stick on top of your TV to run games, stream videos, or interact with other Android apps on your TV. It also comes with a wireless remote which you can use as a keyboard, game controller, or media remote.

Archos introduced the TV Connect in January, promising that it’d be available by February for $130. That didn’t happen, but half a year later, you can now buy the Archos TV Connect in Europe for about €150. 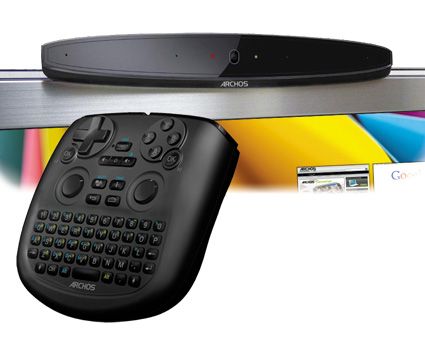 Archos is hardly the only company to release an Android TV Box in the last year. But the French company has made a bit of a name for itself by offering affordable Android tablets over the past few years, so if you’re wary of buying a model from an unknown Chinese company, the Archos name might mean something… although like I said, the company’s reputation is for cheap devices, not necessarily high quality devices.

On paper, the specs for the TV Connect look decent, if a bit dated. The device features a 1.5 GHz TI OMAP 4470 dual-core ARM Cortex-A9 processor, 1GB of RAM, and 8GB of storage plus a microSD card slot for up to 32GB of extra storage.

It also features a micro USB port, a USB host port, Ethernet jack, and mini HDMI output. You can use those ports to connect the device to your TV, router, external storage, a mouse or keyboard, or other peripherals.

It also supports WiFi and the wireless remote connects to the TV Connect over Bluetooth (something that caused a few problems during a demo at the Consumer Electronics Show earlier this year, where wireless signals were constantly getting crossed).

Unlike most cheap Android boxes, the Archos TV Connect also has a front-facing camera and a built-in mic, which means you can place the device atop a TV and use it to make video calls over Skype or other VoIP services.

While some similar devices have lower price tags, faster processors, or both, the Archos model at least has its unusual remote control for gaming, typing, or controlling on-screen action.