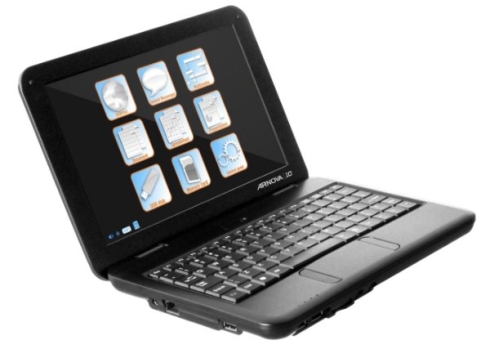 Archos is probably best known for making portable media players, and an ever-expanding line of Android powered tablets. But the company also dipped its toe in the netbook space a while back with the Archos 10 mini-laptop.

The Archos 10 may not have been a runaway success, but that apparently hasn’t stopped the company form launching a second laptop with a 10 inch screen. The Archos Arnova, though, is a different kind of machine than the Archos 10.

While the first Archos netbook has a 1.6GHz Intel Atom N270 processor, 1GB of RAM, and the ability to run Windows XP, Linux, or  other desktop operating systems, the Archos Arnova is a budget device with a 533MHz ARM-based processor, 128MB of RAM, 2GB of storage, and the Windows CE 60 operating system.

Put simply, it’s meant for surfing the web, running a few apps, and not much else. On the other hand, it’s priced pretty decently. It’s going for just £126.75 at Amazon UK. That’s just over $200 US.

There’s no word on whether this mini-laptop will make it to the US or other countries anytime soon.