The Archos SmartPad is sort of a cross between a stereo system and an Android tablet. It runs Android 4.0 and features a 7 inch touchscreen display. But it’s not a tablet.

Instead, there are large speakers on the sides and a stand that make it look more like a funky clock radio than a tablet.

It’s also not quite as unique as I thought when I first learned about the SoundPad last week. It turns out the Archos may be slapping its name (and silver/gray color) on an existing product called the MA-107 Smart Box. 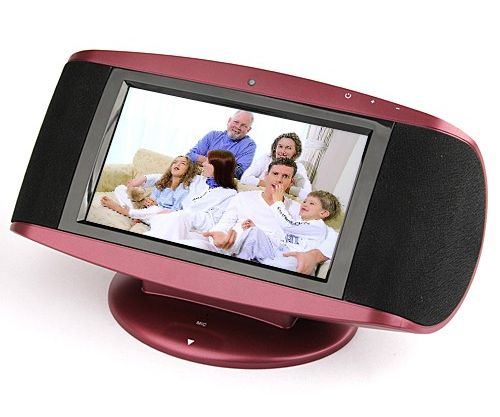 ArcTablet noticed that Wholesaler Sunsky is selling the MA-107 for less than $200 (with shipping), and you can also pick one up from PandaWill or AliExpress.

Since Archos is taking pre-orders in Europe for a little over $205, it doesn’t look like you’ll save much money by ordering an MA-107 instead. But the retail product listings do provide a few more details about the hardware.

It has a 1024 x 600 pixel TFT display with a capacitive touch panel and a 130 degree viewing angle, a 2MP front-facing camera, 802.11n WiFi, HDMI output, and an Ethernet jack. There’s also a mini USB port and a microSD card slot.

The MA-107 has a 2000mAh battery which is supposed to provide up to 5 hours of battery life — although I suspect this sort of machine is more likely to hang out on a desk, dresser, or kitchen counter and stay plugged into a wall than your average Android tablet.

2 replies on “Archos SoundPad has a twin: Meet the MA-107 Android “smart box””