Archos is working on a second-generation GamePad tablet as a follow-up to the 7 inch gaming tablet that launched earlier this year. The Archos GamePad 2 passed through the FCC recently, and now a product page at the HKTDC website lets us know what kind of hardware to expect.

The new Archos GamePad 2 will be about the same size as its predecessor, but it’ll have a higher resolution display, a faster processor, and more memory. 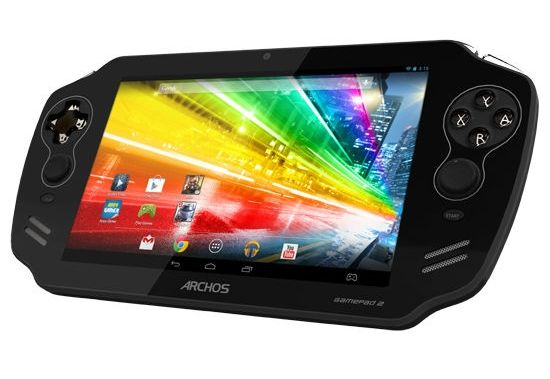 What makes this a gaming tablet are the D-pads and buttons built into the case. They make the GamePad 2 larger than most 7 inch tablets, but they let you hold onto the tablet by its sides, use your thumbs and fingers to mash buttons, and play games without your hands getting in the way of the action on the screen.

The tablet does have a capacitive touchscreen, but you can use button mapping software to control many games without using the touch panel.

Retail pricing hasn’t been announced, but you can pick up 500 units for $170 each if you want to buy wholesale. If I had to guess, I’d say that means this tablet will launch later this year for around $200 retail.