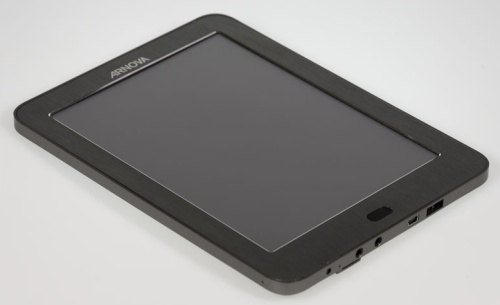 The Archos Arnova A80KSC is an 8 inch Android tablet due out in Russia soon, and possibly other countries as well. The folks at Russian site The eBook posted the first photos of the tablet last week, and now they’ve followed up with an in-depth overview of the device.

Here’s the short version: The Arnova A80KSC is designed to be a cheap internet tablet and media device. It doesn’t have a bleeding edge processor, a super high resolution display, the latest version of Android, or access to the Android Market. But it certainly could make a decent tablet for reading eBooks and surfing the web without breaking the bank.

Spec-wise, the tablet has n 8 inch, 600 x 800 pixel toucshcreen display, a 311 MHz ARM-based processor, and runs Google Android 1.5. It has 8GB of storage, and a microSD card slot for expansion, a micro USB port and USB host capabilities, and a 3.5mm headphone jack. The tablet weighs about 1.1 pounds.

On the bright side, the 4:3 screen aspect ratio should be good for viewing web pages and reading books, and as an added bonus it’s a matte display. The eBook also seem reasonably impressed with the overall look of the tablet, but describe the screen as feeling cheap.

There’s no official word on pricing or a release date for the A80KSC yet… and it will probably get a new, easier to remember name before it officially hits the streets.