The Archos Arnova 9 G3 is an upcoming tablet with a 9.7 inch display, Android 4.0 Ice Cream Sandwich operating system, and a it’s expected to carry a relatively low price tag. The tablet should hit the street soon, and today it showed up today at the FCC website. 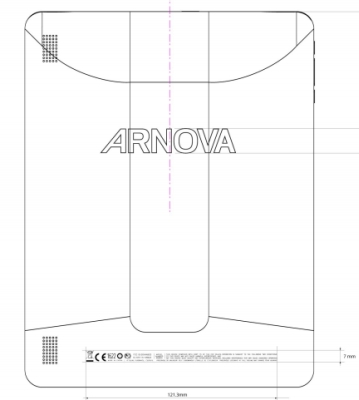 Archos is known for making inexpensive tablets, and the company sells some of its cheapest models under the Arnova brand name.

But while the Arnova 9 G3 isn’t going to best the latest iPad or Asus tablet in speed tests, it doesn’t look like a particularly bad device.

The third-generation Arnova tablet is expected to have a 9.7 inch, 1024 x 768 pixel IPS display with wide viewing angles, a 1 GHz Rockchip RK2918 single core processor, 1GB of RAM, and 4GB of storage. It will weigh about 1.4 pounds, making it about the same size as an iPad.

There’s no word on the price or release date for the new Arnova tablet. Archos also has new 7, 8, and 10 inch Arnova tablets in the pipeline.

One reply on “Archos Arnova 9 G3 tablet hits the FCC”