The Archos Arnova 9 G2 is a budget tablet with a 9.7 inch display and Android 2.3 operating system. Archos introduced the tablet a few months ago, and now it’s available for purchase from several retailers in the US. 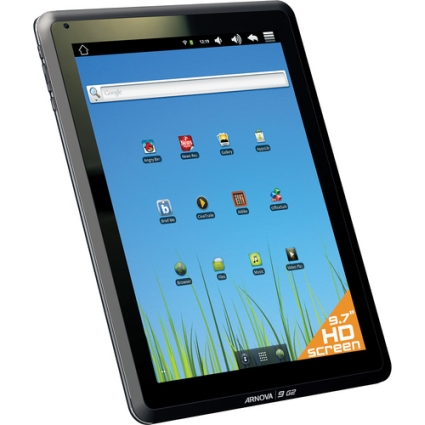 The tablet has a 1024 x 768 pixel capacitive multitouch screen, an ARM Cortex-A8 1 GHz single core processor, and 4GB of storage. It has a microSDHC card slot for expansion, 802.11b/g WiFi, and supports up to 6 hours of battery life while watching videos (or 4 times more when listening to music with the screen off).

Out of the box the Arnova 9 G2 includes the AppsLib app market instead of the official Google Android Market. I suspect it won’t take long for someone to figure out how to hack the tablet to use the Android Market though, Archos tablet users have a long history of tweaking their tablets with such fixes.