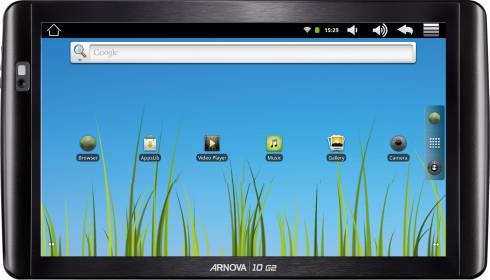 The Arnova 10 G2 is a tablet with a 10.1 inch, 1024 x 600 pixel capacitive touchscreen display, a 1 GHz ARM Cortex-A8 processor and Google Android 2.3 Gingerbread operating system. The tablet is part of the budget-line of Arnova devices from Archos, a French company that offers tablets and media players.

The publisher of the Philadelphia Daily News and Inquirer newspapers recently partnered with Archos to offer the Arnova 10 G2 for $99 and up when they signed up for digital newspaper subscriptions. That made Philadelphia Media Network the first company in the US to offer the new tablet. But now you can pick one up without subscribing to a newspaper.

TigerDirect is selling the Arnova 10 G2 through its eBay store for $199.99. Oddly the tablet still isn’t available from the TigerDirect website.

While the Arnova 10 G2 doesn’t have a dual core processor, Android 3.x Honeycomb operating system, or some of the other features we’ve come to expect from top tier tablets, it doesn’t look like a bad device for a tablet that sells for $200. It weighs about 1.3 pounds, has a g-sensor, mic and speaker, and support for 1080p HD video playback and 720p video recording. The tablet has only 4GB of on-board storage, but it does have a microSDHC card slot for expansion.

One thing the Arnova 10 G2 is missing is official support for the Google Android Market. But you can easily add any number of third party app stores to the tablet, and hackers have been unofficially adding the Android Market to Archos devices for years. I suspect it won’t take long for someone to discover a way to do the same with the company’s latest 10 inch model.