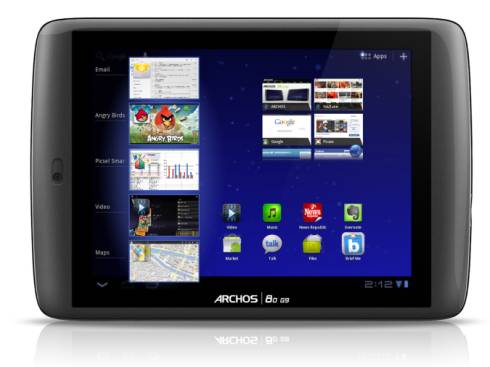 The Archos 80 G9 tablet features a 1 GHz TI OMAP4 dual core processor and an 8 inch, 1024 x 768 pixel display. First introduced this summer, the 8 inch tablet is now available for purchase in the US… in limited quantities. You can pick one up for $299.99 from the Archos Store.

There will be a model with a faster 1.5 GHz processor and additional storage available soon, but for $300 you get a device with 8GB of storage, Google Android  3.2 Honeycomb, and support for a wide range of audio and video codecs. The Archos 80 G9 can handle MP4, H.264, and WMV9 videos with resolutions up to 1080p. It can also play FLAC, OGG Vorbis, AAC, WMA, WAV, and MP3 audio, as well as several different video subtitles formats.

Archos is a French company that’s earned a reputation over the last few years as a maker of budget Android devices which offer acceptable but not spectacular performance. But the company’s G9 tablets could change things. They’re cheaper than most comparable tablets from big-name PC makers, but with starting prices around $300 they’re not exactly cheap. They also feature premium specs including capacitive multitouch displays, fast dual-core processors, and the latest Android operating system.

The company hasn’t given up on its inexpensive tablet roots though. Earlier this year Archos launched the Arnova brand for Android tablets that sell for $200 or less.