The Archos 80 G9 is an Android tablet with an 8 inch, 1024 x 768 pixel display and a dual core TI OMAP 4 processor. It started shipping last year — but now it looks like Archos may be preparing to introduce a new model.

A tablet called the Archos 80 Cobalt showed up at the FCC website today. 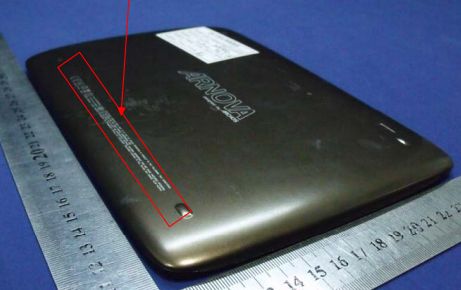 There aren’t many details about the new tablet at this point. We know it supports 802.11b/g/n WiFi, and based on the photos it seems to be the same size and have the same screen aspect ratio as the original Archos 80.

If the name is anything to go by, this could just be a new model with a blue color. On the other hand, it’s been 8 months since the launch of the original Archos 80 — so I wouldn’t be surprised if Archos has updated some of the tablet’s hardware as well.

At the very least, I would hope this model will be available with Android 4.0 and a 1.5 GHz processor if and when it goes on sale in the US.

Update: While the FCC documents refer to the tablet as the Archos 80 Cobalt, the label on the back says Arnova, suggesting this will be part of the budget line of tablets from Archos that are sold under the Arnova brand.

ArcTablet also suggests that this could be one of the first tablets from the upcoming Archos Elements line of mid-range tablets.