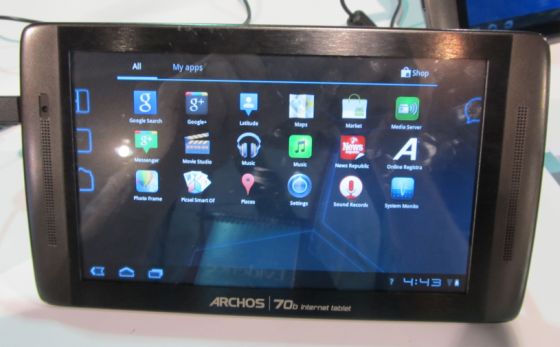 The Archos 70b is a 7 inch Android tablet with a 1.2 Ghz single core processor and 8GB of storage. It’s the first 7 inch tablet from Archos to ship with Android 3.2 Honeycomb — and since it’s been certified by Google to support the operating system, it also comes with the Android Market, Google Maps, and other Google applications preloaded.

Up until now, only the Archos 101 G9 and Archos 80 G9 tablets featured the Android Market. All of the other Archos tablets, including earlier Archos 70 models, came with the third party AppsLib app store instead.

Archos will sell the 70b for $199 and expects to ship the tablet this month.

It features a 1024 x 600 pixel display, 512MB of RAM and 8GB of storage. It’s certainly not the fastest Honeycomb tablet around, but it runs the operating system reasonably well — and it’s one of the few Android tablets you’ll find that has a built-in kick-stand.