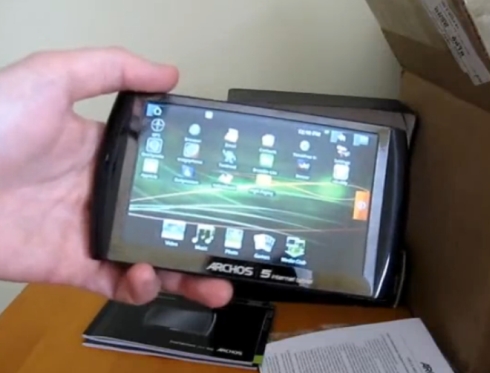 Over the past few months we’ve seen a lot of talk about 5 to 10 inch tablets running Google Android and other mobile operating systems. That’s largely because you can’t run Windows XP or 7 on a tablet with a cheap and energy-efficient ARM-based processor. And it’s also because an OS designed for a smartphone actually makes a lot more sense on some touchscreen devices without keyboards than a full blown OS like Windows 7 that was really designed for navigation with a keyboard and mouse.

But the vast majority of Android tablets shown off at trade shows including CES and Mobile World Congress aren’t actually available to the public yet. Sure, they’re coming soon. But if you actually want to plunk down some cash and get a tablet style device running Android today, you can. Archos, a company best known for producing portable media players, offers a Google Android powered device called the Archos 5 Internet Tablet.

The Archos 5 features a 4.8 inch, 800 x 480 pixel display and an 800MHz ARM Cortex A8-based processor. It has 256MB of RAM and is available with 8GB to 500GB of storage.  It features 802.11b/g/n WiFi and has a USB 2.0 port. Like other Archos tablets, the Archos 5 Internet tablet excels at media playback. It can handle 720p HD H.264 and MPEG-4 video and there are optional docks that let you output video to a TV or even allow the tablet to function as a digital video recorder.

Out of the box, the Archos 5 Internet Tablet runs Android 1.6. But it can’t access the Android Market, which means you’ll have to use the Archos AppsLib utility to find and download third party applications. And while there are a fair number available, many of the apps that I’ve been able to download on the Google Nexus One smartphone simply aren’t available in the Archos AppsLib app store.

There are third party utilities floating around that do allow you full access to the Android Market, but you’ll need to have an earlier version of the Archos 5 Internet Tablet firmware in order for that hack to work.

I’ve only spent a few minutes with the Archos 5 so far, but so far I’m moderately impressed. With a starting price of just $250, the Archos 5 is one of the cheapest devices you can purchase if you want a tablet that will let you surf the web from your couch over WiFi without signing up for a 3G service plan. And it has a larger, higher resolution display than the iPod Touch.

On the other hand, the touchscreen seems to be designed more for stylus input than finger input, while Android is more of a finger-friendly platform. The lack of full Android Market support and Flash video is also disappointing, although it’s possible that both of these issues could be addressed in future firmware updates.

I’ll have a more detailed review soon, but in the meantime you can check out my unboxing and first impressions video after the break.