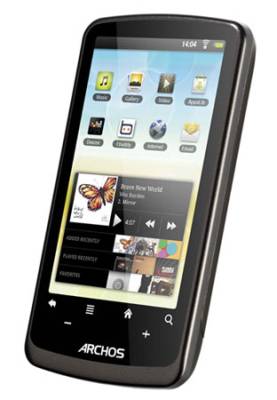 Archos has added yet another member to its growing family of Android-powered tablets and portable media players. The Archos 35 IT showed up at French retailer Fnac recently for just under 100 Euros, or about $134 US.

The little tablet has a 3.5 inch, 272 x 480 pixel display, 4GB of storage, an 800 MHz ARM Cortex-A8 processor and runs Google Android 2.2 Froyo. It looks like a slightly larger version of the Archos 32 tablet which was released last summer, and appears to be part of the Archos Gen8 lineup rather than the company’s new Gen9 product line.

Gen9 devices including the new Archos 101 and Archos 80 have faster processors and run Google Android 3.2 Honeycomb.

Still, for about 100 Euros, the Archos IT looks like a decent little upgrade from the Archos 32. In addition to the slightly larger display the new model has a built-in speaker, whereas its predecessor only had a headphone jack.

Like most Archos tablets, the new device supports a wide range of audio and video formats including H.264, MP4, MP3, AAC, FLAC, and OGG Vorbis.

Unfortunately the Archos 35 IT does not come with access to the official Google Android Market. Instead it ships with the AppsLib app store, although you can probably install the Amazon Appstore, SlideMe, or other third party app marketplaces if you want a wider selection of applications. Or if you want to live on the edge, you can install an unofficial, hacked version of the Android Market.

3 replies on “Archos 35 Internet Tablet shows up in France”