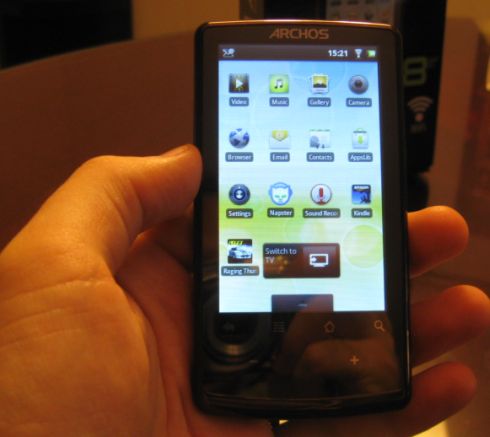 I’ve been running a story a day this week about the 5 new Android tablets Archos introduced last week. I just so happened to run the Archos 32 story earlier this afternoon, without realizing that this would be the first of the new tablets to go on sale.

With 8GB of built in storage and a 3.2 inch display, the Archos 32 is sort of an Android equivalent of the iPod touch — but cheaper. You do get what you pay for in this case. The iPod touch starts at $229 and has a 3.5 inch, 960 x 640 pixel capacitive touchscreen display, an A4 processor, two cameras, HD video recording capabilities, and a sturdy metal case.

That said, the low price isn’t the only thing the Archos tablet has going for it. This little guy has a composite video output for connecting the tablet to a TV. It can also support a wide range of audio and video formats that would make the iPod touch choke, including WMV, DivX, Xvid, MKV, WMA, OGG Vorbis, and FLAC as well as H.264, MP4, MP3 and AAC.

The Archos 32 is currently shipping with Google Android 2.1, but Archos says Android 2.2 will be available in October. The tablet does not come with the Android Market or Google apps such as Gmail preloaded. Instead it comes with the third party AppsLib market which includes about 5,000 free and paid apps which are available for download — all of which should work on the Archos 32 even though it doesn’t have 3G, GPS, or telephone capabilities.