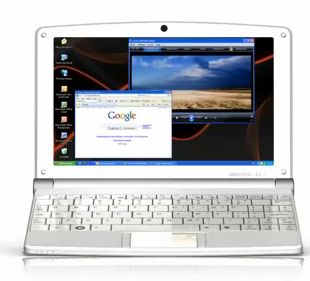 Remember the Archos 10s? The company first introduced an updated version of its 10 inch netbook in June, but it’s been MIA ever since. Now Laptop magazine reports that the 10s should be available in mid-October for about $399.

The Archos 10s has a 1.6GHz Intel Atom N270 CPU, 1GB of RAM, and a 160GB hard drive. Nothing special there. But the laptop is fairly thin and light, even by netbook standards. It weighs just 2.2 pounds and measures 0.87 inches thick.

Archos, which is best known as a maker of portable media players, also throws some media software and some free credit for downloads from the Archos Media Store in with its netbooks, which might make the 10s a bit more attractive to some customers. Despite the fact that the laptop is due out in mid-October, just days before Windows 7 launches, the Archos 10s will ship with Windows XP.

8 replies on “Archos 10s to hit the streets in October”