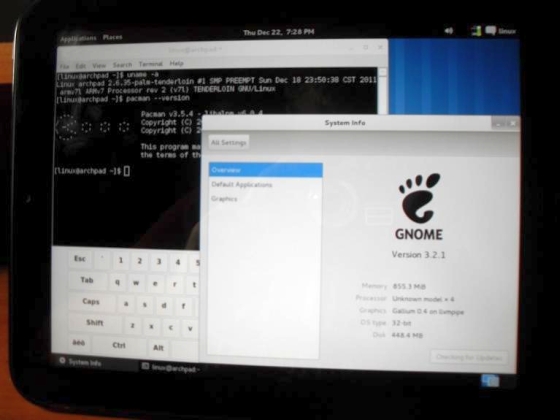 Before hackers figured out how to install Google Android on the HP TouchPad, people were using the 9.7 inch tablet to run Ubuntu Linux… sort of. The discontinued tablet actually shipped with HP’s webOS software preloaded and early attempts to run Linux didn’t boot Linux instead of webOS. They basically let you run Ubuntu alongside Android and run Ubuntu apps without rebooting using UbuntuChroot.

Right now there are at least three different projects underway to port popular Linux distributions to run on the TouchPad.

They’re all pretty rough around the edges at this point.

All of the releases are aimed at developers that are interested in helping to troubleshoot problems.

Arch is probably furthers along, but the webcam isn’t supported, sound doesn’t work, and neither does Bluetooth. But if you want a mostly usable Linux operating with the GNOME desktop environment, Arch might be the way to go for now.

You can find download links and rudimentary instructions by following the links above. If you don’t understand the instructions, then you’re probably not the intended audience and you should wait until more stable software is available.

Update: You can find instructions for installing Ubuntu at a project page on Google Code. The video below shows the operating system in action.

4 replies on “Arch, Ubuntu, and Debian Linux ported to the HP TouchPad tablet”