Over the past few years I’ve seen a lot of inexpensive netbooks with low power ARM-based processors running Android, Windows CE, or other light-weight operating systems. Normally I don’t pay much attention, because these cheap little devices can’t run Windows and aren’t as fast as most netbooks with Intel or AMD chips.

But it turns out that these little guys aren’t stuck with Android or Windows CE. Blogger doragasu has figured out how to install Arch Linux on a 7 inch netbook with an 800 MHz WM8650 processor, and it actually seems to run reasonably well.

You can find detailed instructions for configuring and running Arch Linux at his website. 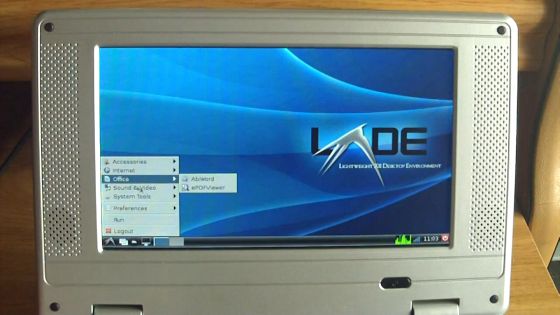 The operating system actually boots from an SD card, which means you don’t have to erase Android to try Arch Linux.

The little computer boots Arch in about 40 seconds, and seems to be capable of running apps that don’t require a lot of memory or super-speedy processors. The Chromium or Firefox web browsers, for instance, might be a bit hard to run on a WM8650 netbook, but Midori or Links seem to run.

You could also use the netbook for editing text, chatting on IRC, or performing other basic computing tasks.

WM8650 laptops are available from a number of sources. I found a number of sellers at AliExpress offering the computers for $75 or less, including one that’s selling the little laptop for $66 with free shipping included.

You can find similar deals for WM8650 netbooks at eBay.

Most models seem to come with Android 2.2, but there’s no touchscreen so you’ll have to use the touchpad and mouse to interact with the operating system. In some ways, it seems like the hardware is better suited to Linux than Android.

Clearly this is a case of getting what you pay for. There are far better laptops available with faster processors, more memory, and higher resolution displays. But if you’re looking for a cheap toy to tinker with, or possibly an inexpensive solution for light occasional web browsing, internet chat, and document editing, doragasu has demonstrated that it’s possible to turn this $66 netbook into a little Linux laptop.

There are also tools available to install Debian or Arch Linux on tablets featuring the WM8650 CPU.